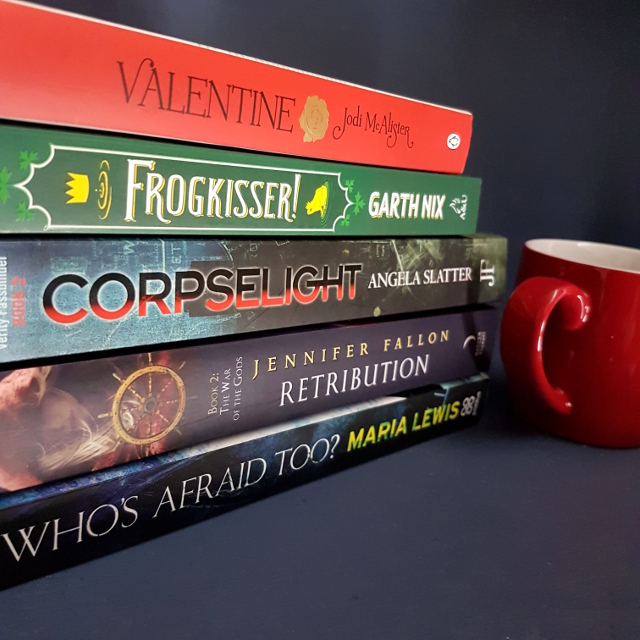 With 2017 done, awards season is once again gearing up. To assist with the nominating process, I thought I’d share a list of works I’ve reviewed that are eligible.

The Ditmars are Australia’s popularly-voted awards for SFF. Traditionally, they’re presented at NatCon. In 2018 that will be Swancon 43, held in Perth from 29 March to 2 April.

Bitten by Amanda Pillar
Corpselight by Angela Slatter
Crossroads of Canopy by Thoraiya Dyer
Frogkisser! by Garth Nix
The Impossible Story of Olive in Love by Tonya Alexandra
Retribution by Jennifer Fallon
The Time of the Stripes by Amanda Bridgeman
Valentine by Jodi McAlister
Who’s Afraid Too? by Maria Lewis

I am also eligible for Best Fan Writer and Best Fan Publication in Any Medium for these reviews.

The Hugos are the international popularly-voted awards for SFF. Traditionally, they’re presented at Worldcon. In 2018 that will be held in San Jose, USA, on 16-18 August.

Provenance by Ann Leckie
Under the Pendulum Sun by Jeannette Ng

Acadie by Dave Hutchinson
The Furthest Station by Ben Aaronovitch

A Voyage Through Air by Peter F. Hamilton
The Dragon with a Chocolate Heart by Stephanie Burgis
The Epic Crush of Genie Lo by F.C. Yee
Not Your Villain by C.B. Lee
One Dark Throne by Kendare Blake
Rift Riders by Becca Lusher
Strange the Dreamer by Laini Taylor

Happy nominating, everyone! If you have recommendations (particularly for short stories), I’d love to hear them!