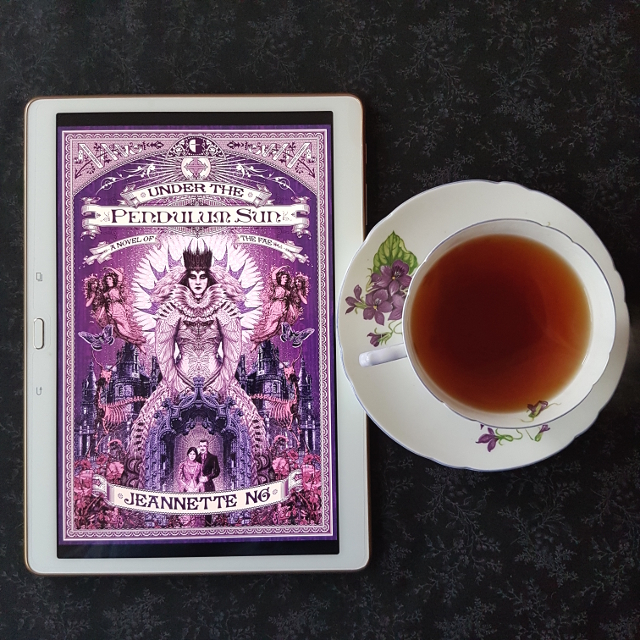 Catherine Helstone’s brother, Laon, has disappeared in Arcadia, legendary land of the magical fae. Desperate for news of him, she makes the perilous journey, but once there, she finds herself alone and isolated in the sinister house of Gethsemane. At last there comes news: her beloved brother is riding to be reunited with her soon – but the Queen of the Fae and her insane court are hard on his heels.

Under the Pendulum Sun is a Gothic-inspired novel that blends the fae with Christian theology while simultaneously undermining traditional narratives of colonialism.

The story is set in an alternate 19th Century, at the height of the British Empire. Captain Cook has discovered the fae world Arcadia, and Britain has sent in its first missionaries. Leon Helstone is the second missionary to serve at Gethsemane, an isolated castle in Arcadia. As his correspondence becomes increasingly terse, his sister Catherine grows worried and is persuaded to travel to Gethsemane to check on him. What she finds there is beyond her wildest imagination.

One of the things I loved about this book was the eerie whimsy of the setting. It’s clear that Arcadia is a world vastly different to our own. Not only is the sun a literal pendulum, but the moon is the light of a giant angler fish. Weather doesn’t just happen, it has to be bought from a Goblin Market. In order to arrive at your destination, you have to experience two uncomfortable memories and a daydream, or meet similar abstract requirements. These fairy tale elements tie in nicely to some of the more traditionally Gothic set pieces. Mysterious figures haunt the castle, which, like the landscape outside the walls, seems to change shape at whim. It is all too easy to get lost.

Although the missionaries seek to bring the Word of God to the fae, their task is a difficult one. Arcadia is an unconquered civilisation, still at the height of its power. The Pale Queen rules with an iron fist, and the missionaries are permitted within her borders solely because it amuses her. As such, the Helstones must rely on the persuasiveness of their arguments in a world where the natural order as they know it doesn’t exist. This introduces them to doubt and both Cathy and Leon wrestle with their faith, even as they attempt to provide guidance to their sole convert.

The story delves with surprising depth into Christian theology, particularly through the middle of the book. The many discussions make for a slow pace at times, and occasionally it feels like everyone is just waiting for time to pass. Which they are: it serves to show how thoroughly dependent they are on the Pale Queen. However, the slow pace and the subject matter mean it’s just not going to suit some readers–particularly those who expect the inclusion of fae signals a story in line with young adult and urban fantasy tropes.

As is sometimes the case in the latter subgenres, this story incorporates transgressive love. However, it takes its cues from Gothic traditions and doesn’t tame this into acceptability. I can’t say too much about this issue without spoilers, but it will certainly put off a number of readers, even as it deftly ties into the ending. (Readers who want to know more can feel free to comment below or ping me on Twitter).

Overall, Under the Pendulum Sun is a fascinating story, but is unlikely to be everyone’s cup of tea.