You are here: Home > Frogkisser! by Garth Nix 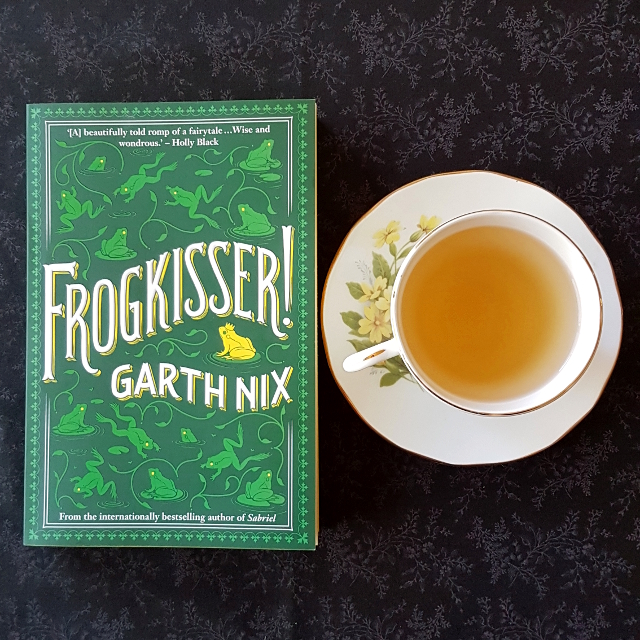 Talking dogs. Mischievous wizards. An evil stepstepfather. Loads and loads of toads. Such is the life of a Frogkisser.

Princess Anya needs to see a wizard about a frog. It’s not her frog, it’s her sister’s. And it’s not a frog, it’s actually a prince. A prince who was once in love with Anya’s sister, but has now been turned into a frog by their evil stepstepfather. And Anya has made a ‘sister promise’ that she will find a way to return Prince Denholm to human form…

So begins an exciting, hilarious, irreverent quest through the Kingdom of Trallonia and out the other side, in a fantastical tale for all ages, full of laughs and danger, surprises and delights, and an immense population of frogs.

Garth Nix is highly regarded for his Middle Grade and YA fantasy, and Frogkisser! is unlikely to change that. It is a charming story with some fresh takes on a few traditional fairytale elements.

Anya is the youngest of two princesses. Her sister, Morven, is flighty and obsessed with boys. All Anya wants to do is hang out in the library and read books (and really, who can blame her?), but someone has to be the responsible one. Anya and Morven’s stepmother is off chasing rare plants, while their stepstepfather is an evil, cold-hearted sorcerer bent on taking over the kingdom. In order to achieve his ends, he plans to send Anya away to boarding school. However, Anya escapes first with the aid of the royal dogs.

Along the way, Anya encounters a number of fairytale tropes, including Snow White and the Seven Dwarves, the Good Wizard and a flying carpet. One of the things I loved about the story was that these elements never manifest in quite the way you expect them to–there’s always a twist . As someone with a stepmother I adore, it was refreshing to see the part of the villain instead played by Anya’s stepstepfather (the man her stepmother married after her father passed away).

Nix is clearly a dog person. Readers familiar with his Old Kingdom series may remember the Disreputable Dog. Frogkisser! has the royal dogs, a pack of canine advisers to the royal family. They’re presided over by matriarch Tanitha, and one of the younger dogs, Ardent, serves as a companion to Anya on her adventures. Being a dog person myself, I loved these characters and there were a few observations of canine behaviour that had me chuckling in recognition.

Tanitha isn’t the only female in a position of power in this book: women are everywhere. They are warriors, healers and bandits. It was such a delight to read a story where the gender balance was equal and where not all the women were white.

While it is a Middle Grade novel, adult readers will find plenty to enjoy. Geekish references are sprinkled throughout the story; there was one Lord of the Rings reference almost at the end that had me laughing out loud.

All in all, Frogkisser! is an absolute delight to read, no matter what your age.

2 Responses to Frogkisser! by Garth Nix