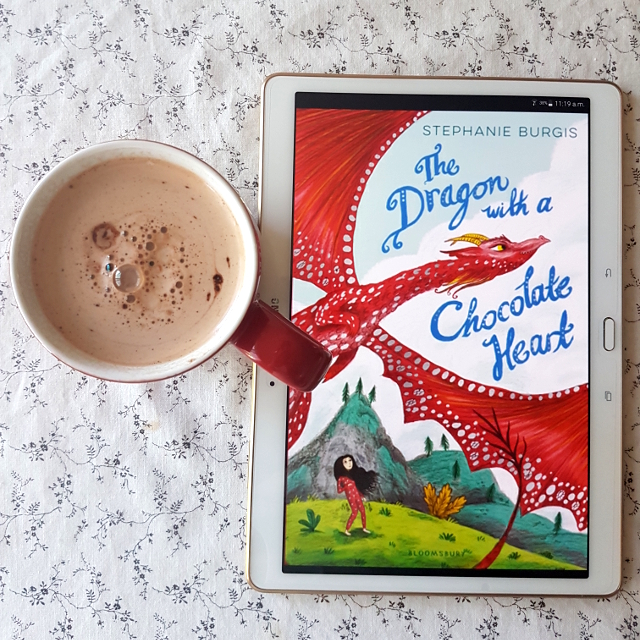 Aventurine is the fiercest, bravest dragon there is. And she’s ready to prove it to her family by leaving the safety of their mountain cave and capturing the most dangerous prey of all: a human. But when the human she finds tricks her into drinking enchanted hot chocolate, Aventurine is transformed into a puny human girl with tiny blunt teeth, no fire, and not one single claw.

But she’s still the fiercest creature in the mountains — and now she’s found her true passion: chocolate! All she has to do is get herself an apprenticeship (whatever that is) in a chocolate house (which sounds delicious), and she’ll be conquering new territory in no time…won’t she?

Judging a book by its cover–or its title–has led to many disappointments. But how could I resist a book called The Dragon with a Chocolate Heart? Fortunately, it proved to be utterly charming.

Aventurine is the youngest dragon in her family. She’s an engaging character who is fierce, headstrong and passionate. She just wants to explore the world! However, her mother won’t let her out of the family’s mountain until her scales have had at least 30 years to harden. Of course, Aventurine has never been good at following rules.

The book is intended for a Middle Grade audience and strikes a good balance with the detail it uses. One of the details I especially appreciated was the names of the dragons. Not only are all of them named after gemstones, but Aventurine and her siblings are all named after types of quartz.

This deft use of detail also applies to the depiction of making chocolate. While the story doesn’t go through every step in the process, it gives enough of them to feel authentic and doesn’t shy away from using specific terminology.

The world-building likewise gives enough detail to feel Regency-influenced while not getting too bogged down in the specifics. The city of Drachenburg comes with as many restrictions as Aventurine’s mountain home. It is hard enough adjusting to the physical reality of being a human. However, Aventurine also has to contend with issues of class and rules of propriety that mean nothing to her.

Historical settings, or settings with strong historical influences, can often feature a whitewashed cast. I was pleased to see that wasn’t the case here. Aventurine’s friends come in a wide variety of skin-tones.

Speaking of Aventurine’s friends, friendship is not something that comes naturally to Aventurine. While not solitary, dragons stick to their family groups. That becomes impossible for Aventurine, once she’s transformed into an untrustworthy human. Instead, she has to overcome the lessons her family has taught her in order to find friendship. This is no mean feat, because even as a girl Aventurine is constantly assessing those around her for a threat, identifying which humans are formidable predators intent on taking advantage of her.

Overall, I found The Dragon with a Chocolate Heart a delightful read and I’d be keen to see more of Aventurine’s adventures with her new friends. However, be warned! This book will leave you craving chocolate.