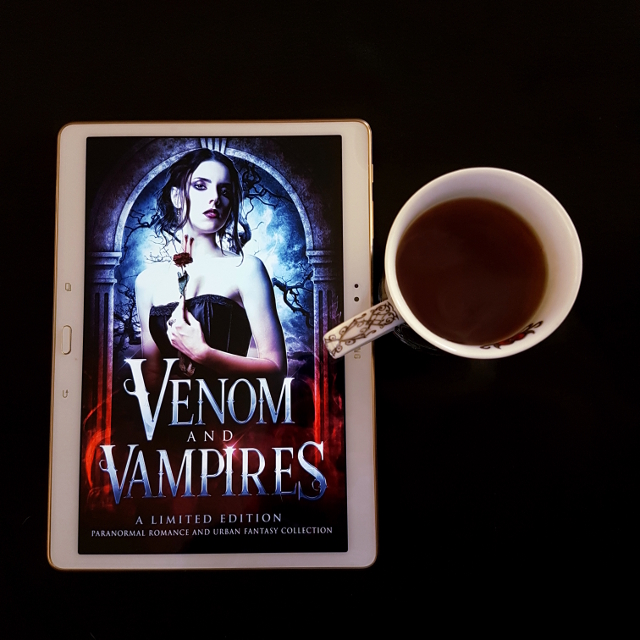 Born to a were mother and vampire father, Aria Ash is the perfect blend of two races, and in their world, that’s a death sentence. Hunted for as long as she can remember, she now hides in plain sight in the city of Skarva, and will do anything to keep her secret safe.

Sebastian Talien is an alpha were with a troubled past. Ever since his pack went rogue and tried to kill three innocent pups, he’s been dedicated to rescuing children in need. Now an invitation has him heading to Skarva, to help a child he thought he’d failed

Ashes is a novella set in the Graced universe, around the same time as Bitten. While I enjoyed reading it, I ultimately had the same issue with it as I did with Captive: I felt its ambition exceeded its scope.

Since Ashes is part of a collection, I assume it’s meant to appeal to new readers. I feel it’s only partially successful on that front. The beginning works quite well, introducing us to the characters and getting us invested in their relationship. However, the Graced universe is a complex one. Worldbuilding elements necessary for understanding the story were given in a kind of infodump in the guise of one character educating and warning another. The character doing the educating also functioned like a deus ex machina, there to make sure certain things happened. While there is context and an implied reason, it sat rather awkwardly and I’m not sure how it would sit for someone new to the series. It is also old information to returning readers, making it a little bit dull to sit through, even if I enjoyed the cameo from that particular character.

That said, I felt Ashes was a much stronger story than Captive. Aria is a wonderfully fiery character. She’s powerful and quick to protect what’s hers. I really enjoyed the way her strength is something that Sebastian finds attractive, rather than seeing it as a threat. Their relationship is likely to be a bit too insta-love for some readers, but it worked for me. The circumstances and the passion between these two dominant characters sold it. The pair are also able to spend more time together than Laney & Wolf did in Captive. This gives their relationship a more solid foundation before the rest of the action really kicks into gear.

I also really enjoyed the development of the city of Skarva. We got to see the Duke of Ravens in Bitten. In Ashes, we get to meet the Duke of Ashes and learn a little more about the other ruling dukes. I liked that each duke has their own motif, providing a distinctive counterpoint to the vampire nobility of Pinton featured in previous books.

There were also plenty of loose ends left and I’m looking forward to discovering which directions will be explored next.

All in all, Ashes was bumpy in places, but an enjoyable read.