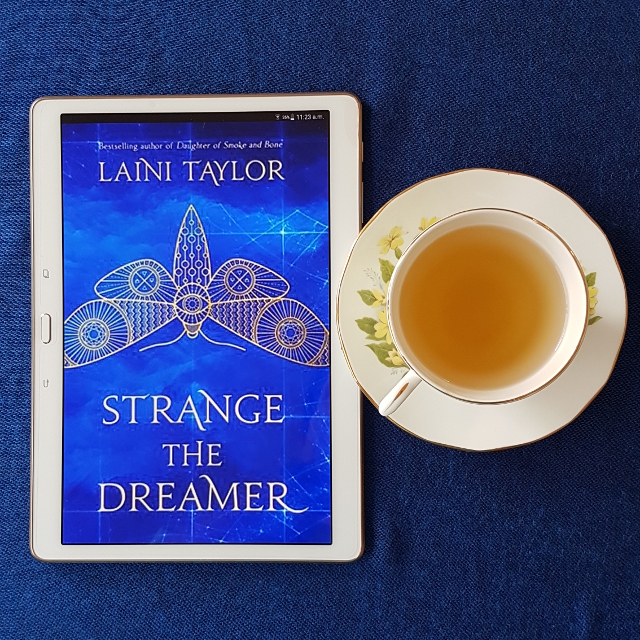 The dream chooses the dreamer, not the other way around – and Lazlo Strange, war orphan and junior librarian, has always feared that his dream chose poorly. Since he was five years old he’s been obsessed with the mythic lost city of Weep, but it would take someone bolder than he to cross half the world in search of it. Then a stunning opportunity presents itself, in the person of a hero called the Godslayer and a band of legendary warriors, and he has to seize his chance to lose his dream forever.

What happened in Weep two hundred years ago to cut it off from the rest of the world? What exactly did the Godslayer slay that went by the name of god? And what is the mysterious problem he now seeks help in solving?

The answers await in Weep, but so do more mysteries – including the blue-skinned goddess who appears in Lazlo’s dreams. How did he dream her before he knew she existed? And if all the gods are dead, why does she seem so real?

Strange the Dreamer is another of the gorgeously mythic fantasy romances that Laini Taylor excels at. However, while I enjoyed it thoroughly, it had a few flaws.

Lazlo Strange is a wonderful character likely to appeal to bookworms. He’s not your usual stunningly-attractive hero. Instead, he’s a bit rough around the edges and had his nose broken when a book of fairytales landed on his face–which tells you everything you need to know about Lazlo. He was a highly imaginative boy with a thirst for stories who grew into a librarian with his nose stuck in a book. Before he went adventuring, of course. He works hard and is the sort of person to offer help to his rival simply because it’s needed.

The book takes us all the way from Lazlo’s humble beginnings to his deeds in Weep. This allows readers to get to know Lazlo well, but makes for a slow-paced story. I usually don’t mind this approach, but even I felt it was starting to drag.

It’s a story full of whimsy and the mythic that Taylor does so well. She is brilliant at creating a mood and making the impossibly epic seem plausible. The descriptions were lovely with some gorgeous turns of phrase. However, a little goes a long way–another reason the pace dragged in places.

Despite its sense of whimsy, it is quite a dark story. Readers triggered by rape and forced pregnancy may want to tread cautiously. These incidents never happen onscreen, but their impact resonates throughout the book. It’s a story that deals with cycles of violence and the seeming impossibility of breaking them.

Strange the Dreamer felt like it trod a lot of the same ground as Daughter of Smoke and Bone. Some of it was the structure: the slow set-up, the gradual uncovering of the past and the late explosion into action. There were also some thematic elements that cropped up, such as the preoccupation with angels and demons (here flavoured with some Hindu-inspired elements such as the appearance and titles of the gods). The trajectory of Lazlo’s relationship with Sarai also felt very familiar and may be a bit too insta-love for some readers.

It may sound as if I didn’t enjoy Strange the Dreamer when it actually swept me away (once it warmed up). I enjoyed the dark whimsy of it and the later stages of the book do a fantastic job of building tension. I’ll definitely be watching for the next book. However, this is definitely not going to be the book for everyone.

4 thoughts on “Strange the Dreamer by Laini Taylor”