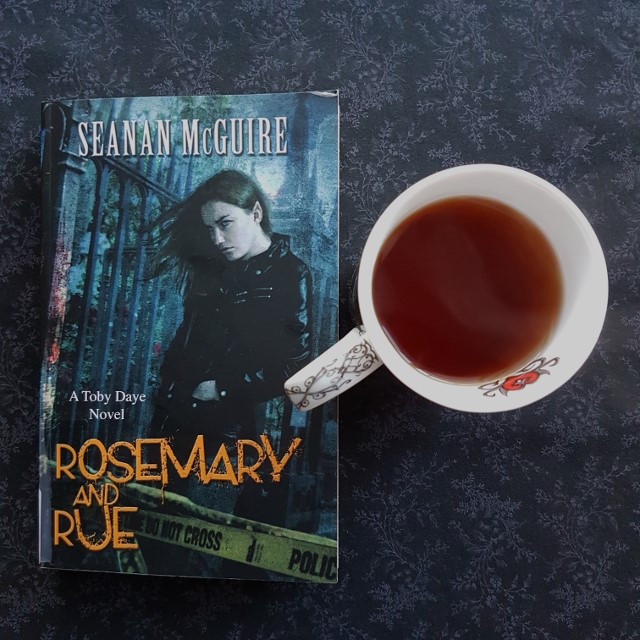 October “Toby” Daye, a changeling who is half human and half fae, has been an outsider from birth. After getting burned by both sides of her heritage, Toby has denied the Faerie world, retreating to a “normal” life. Unfortunately for her, the Faerie world has other ideas…

The murder of Countess Evening Winterrose pulls Toby back into the fae world. Unable to resist Evening’s dying curse, which binds her to investigate, Toby must resume her former position as knight errant and renew old alliances. As she steps back into fae society, dealing with a cast of characters not entirely good or evil, she realizes that more than her own life will be forfeited if she cannot find Evening’s killer.

I love urban fantasy. I particularly love dark urban fantasy with fae. So, it’s no surprise that Rosemary and Rue hit all my buttons.

It has a rather noir feel to it. Toby is a retired PI who gets pulled in for one last job. Only, in this case, she gets pulled in by a magic curse. Noir is not my favourite genre, but the mood fit the story well. This is a dark tale with plenty of violence and blood. Hemophobes may want to give this one a miss, particularly as Toby also spends a lot of time getting shot or recovering from getting shot. Blood magic also plays a key part in the story.

The magic was one of the things I loved most about the story. Toby’s magic is carefully limited and she suffers consequences for using it. There’s also a very clear hierarchy in terms of magical power, with the full-blooded fae generally at the top and the changelings towards the bottom. But most of all, I loved the way each magic user has their own signature scent–in Toby’s case it’s copper and cut grass. It was a little detail that helped bring the world to life for me.

If Rosemary and Rue is a gender-flipped noir, the jury is out on the homme fatale. There were a number of candidates and the suggestion of a potential love triangle. However, as with many of McGuire’s books, the emphasis was more on found family than romance. Indeed, Toby’s relationship with Evening struck me as being closer to sisters than friends, particularly given the uneasy and argumentative nature of their relationship. This theme is reinforced by the way Toby can’t seem to help but take several teenage cast members under her wings.

If I had one quibble, it would be the investigative elements. The building of a case against the culprit didn’t feel quite as solid as I would have liked, and there were times when the action sequences were given too much weight instead.

However, I really enjoyed the book and am really looking forward to seeing what the rest of the series has to offer.

4 thoughts on “Rosemary and Rue by Seanan McGuire”