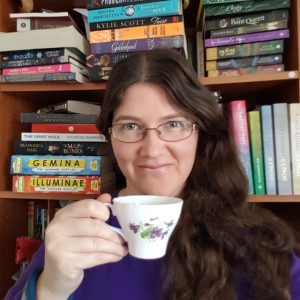 Elizabeth graduated from the University of Canberra in 2008 with a Bachelor of Communications (Honours) and majored in Creative Writing and Literary Studies.

Earl Grey Editing’s blog won a Ditmar Award for Best Fan Publication in Any Medium in 2019, having also been nominated the previous two years.  Elizabeth won the Best Fan Writer category in 2020. She was an Aurealis Awards judge in 2016 & 2018, and also reviews for The Skiffy and Fanty Show.

She has a weakness for books, loose-leaf tea and silly dogs.

“Phoenix Down”, Next, CSFG Publishing, April 2013 (Available in print or electronic format).

“You Insisted On Knowing”, Vertebrae — FIRST 2006, University of Canberra, October 2006