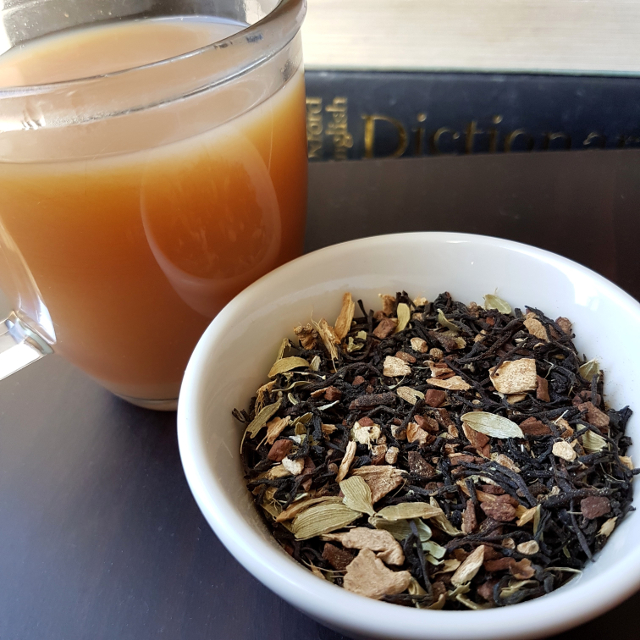 Loose-leaf Links is a feature where I gather together the interesting bits and pieces on sci-fi, fantasy and romance I’ve come across and share them with you over tea. Today’s tea is Real Chai’s original blend. As with most proper chais, it needs milk and sweetener in order to taste good. I’m in favour of honey.

Porpentine Charity Heartscape and Mia Sereno, the two 2016 Tiptree Fellowship winners, report on what they’ve been doing since they were granted the fellowship. The fellowship is given to SFF creators seeking to develop different ways of viewing gender.

The finalists for the Fifth Annual Bisexual Book Awards have been released. There are shortlists for a number of genres, including romance, erotica, speculative fiction and YA.

Over on Lady Business, Ira and forestsofglory team up to offer a 5-book reading guide to the Vorkosigan Saga. The saga has a Hugo nomination for Best Series and is 17 books long, so the article may be useful for overburdened readers.

The NSW Writers’ Centre will be running their Speculative Fiction Festival on 22 July and the program (PDF) looks excellent.

Silvia Moreno-Garcia’s Emerging Indigenous Voices Awards are a step closer to becoming a reality, with judges being announced.

Over at the Book Smugglers, Karuna Riazi shares what it means to her as a Muslim author to have written her first Muslim character.

The Conflux short story competition has just opened. Stories should be up to 4K on the theme of Blood, Gold and Lies.

Ticonderoga Publications are seeking submissions for their 2016 Year’s Best Australian Fantasy and Horror.

N.K. Jemisin shares a recent experience of how not to interview an author. The incident was a trainwreck of astonishing proportions. It turns out the venue that published it has a sense of self-preservation because they later pulled the article and apologised.

Wired ponders why colleges are so hostile to fantasy writers.

Justine Larbalestier muses on the faddishness of publishing.

KJ Charles shares some thoughts on when and how to use sensitivity readers.

Hodderscape have recently acquired Leife Shallcross‘s Beauty and the Beast retelling, The Beast’s Heart, through their open submission process. I published Leife’s first story in Winds of Change, so I am particularly delighted to see she’s moving on to bigger and better things. Congratulations, Leife!

The Kickstarter campaign for the forthcoming anthology Mother of Invention, edited by Tansy Rayner Roberts and Rivqa Rafael, is currently underway and will run until the end of the month.