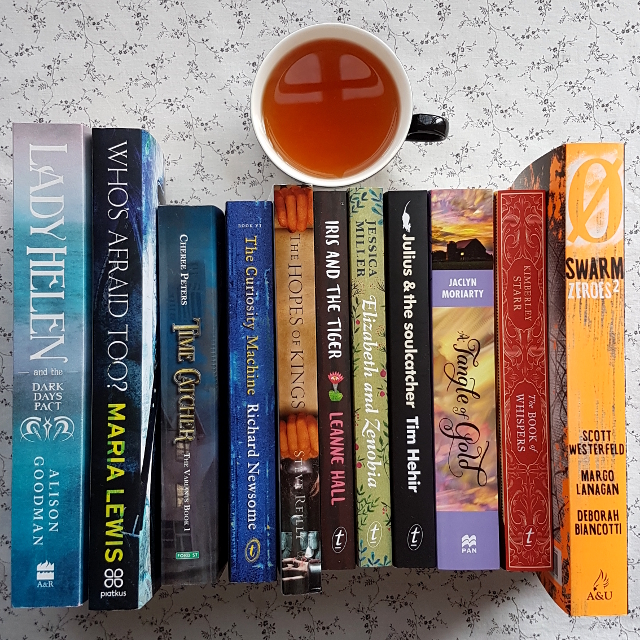 2017 got off to an epic start. With the deadline for Aurealis judging breathing down my neck, I’ve been tearing through the books faster than I’ve been acquiring them. At the rate I’m going, I should have no trouble making it to 100 books by the end of the year. In fact, I’m thinking of revising the goal upward, since I’m already a third of the way there and it’s only February.

My personal reading goals also included one trip to the library a month. I went and picked up Pocket Apocalypse by Seanan McGuire, but haven’t yet had a chance to read it. I’ve still got a couple of weeks before it’s due back, though.

And Then… edited by Ruth Wykes and Kylie Fox
The Doomsday Chronicles edited by Samuel Peralta
Fake Geek Girl by Tansy Rayner Roberts
Sharp Shooter by Marianne Delacourt
Uncanny Magazine, Issue 14
Accidental Abduction by Eve Langlais
Strange the Dreamer by Laini Taylor
A Corner of White by Jaclyn Moriarty
The Cracks in the Kingdom by Jaclyn Moriarty
Pocket Apocalypse by Seanan McGuire
Some of the Best from Tor.com

Tension by Merit. A short prequel to the anime Yuri!!! on Ice told from the perspective of Yuri Plisetski. Yuri is a brilliant figure skater just going through the motions. Even seeing his team mate Victor win yet another world championship does little to inspire him. Then he sees Yuuri Katsuki skate.