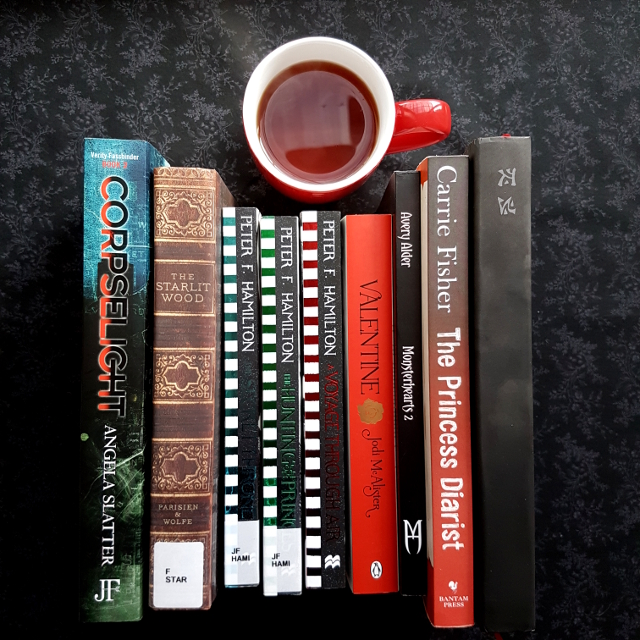 The winter weather must be helping my reading stats because I got through a fair few books this month. Combined with a modest number of acquisitions, I’m on track to break even on Mt TBR this year. Not that I expect that will last, but one can hope.

I continue to meet my goals of borrowing at least one library book and reading at least one piece of fanfic every month. I also got to try my first audiobook this month, after downloading the Libby app. My other milestone this month was replacing my Kindle. It served me well for five years but was struggling to hold a charge and would periodically reset itself. It was an original model, using buttons, so the transition to a touch screen took some getting used to.

108. Beyond Ruin by Kit Rocha. Post-apocalyptic erotica. Seventh book of the Beyond series. Tensions escalate between the privileged city of Eden and the Sector slums surrounding it. Adrian Maddox finds himself caught in the middle of it, drawn back towards his old life as the grandson of Sector One’s former ruler. But this time he’s not alone. However, the tension between him, Dylan, Jade and Scarlet may prove to be just as devastating. This book really shakes up the status quo of the series, which I enjoyed. I also found the dynamics in this four-person relationship to be interesting and well-handled.

109. Paper Girls, Vol. 1 by Brian K. Vaughan. Read for the Hugo Awards. Four newspaper delivery girls are making their rounds in the wee hours of the morning when they get caught up in something strange–the Rapture, or possibly an alien invasion. The 80s nostalgia was nice, but neither artwork nor story did much for me.

111. Monsterhearts 2 by Avery Alder. The second edition of a roleplaying game about secretly monstrous teenagers. In addition to a tightening up of the rules, there’s a renewed focus on diversity. I particularly appreciated the section on incorporating asexual characters in a game that is often driven by sexuality.

113. The Princess Diarist by Carrie Fisher. Read for the Hugo Awards. Carrie Fisher reflects on her affair with Harrison Ford during the filming of Star Wars: A New Hope. Although written with sharp wit, it’s clear she was deeply unhappy. An interesting but quick read.

114. Blades in the Dark by John Harper. A new roleplaying game with an industrial fantasy/gritty steampunk setting wherein the players are thieves, assassins, smugglers, drug dealers, alchemists and witches. A complex system, but one written clearly and concisely. I appreciated explicit discussion of creating and establishing tone, and the obligations of the players.

115. The Scorpio Races by Maggie Stiefvater. My first audiobook. Every year, the island of Thisby holds the Scorpio Races: a deadly sprint along the beach where the riders are mounted on carnivorous water horses. Sean Kendrick has won four of the last six years, but this year he may have met his match in Puck Connolly–a girl desperate to win the races and save her home. An evocative story that hooked me quickly and kept me listening.

117. Matters Arising from the Identification of the Body by Simon Petrie. Review forthcoming.

118. Beyond Ecstasy by Kit Rocha. Post-apocalyptic erotica. Eighth book of the Beyond series. Now that Eden and the sectors are at war, Hawk realises he’s running out of time if he wants to make Jeni his–and for more than just one night. I liked seeing a farm boy in this setting and the recklessness of the characters.

15 Things You Should Know Before You Say Yes by Michelle Ann King. Original fiction at Daily Science Fiction. Written in second person as a series of instructions for an ambassador to an alien planet, it does a good job of conveying the helplessness at being at the mercy of your government.