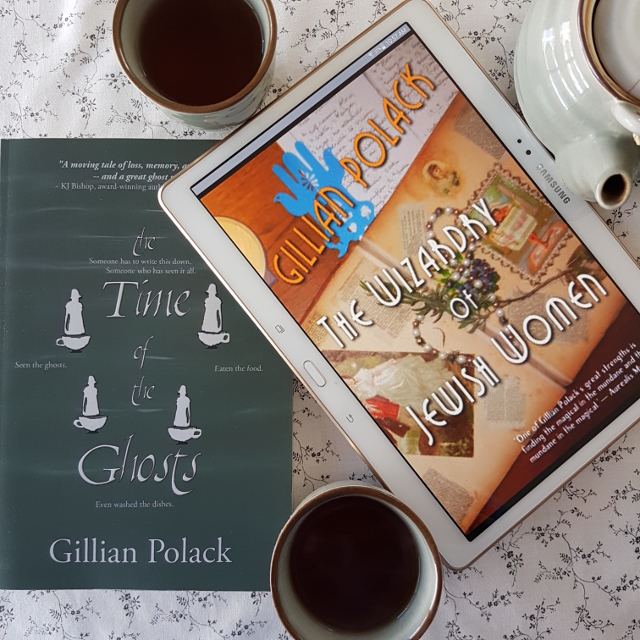 Yesterday marked the re-launch of The Wizardry of Jewish Women. The book was nominated for a Ditmar Award earlier this year and I enjoyed it when I reviewed its initial publication last September. In honour of its re-release, I invited Gillian to write about a topic close to my heart.

Elizabeth has asked me if I could talk about the role of hot beverages in my books. Given that one of the things I like about her is her love of tea, how could I refuse? I won’t talk about all my books, however, just three: The Wizardry of Jewish Women, The Time of the Ghosts and Langue[dot]doc 1305. (In terms of getting hold of them, the only one you can find right now is Wizardry the other two will be available again and I promise to announce when this happens!)

Food and drink are both important to me when I build the worlds for my stories. I use drink as a code for each of my characters. By knowing what kind of hot drink they prefer and how they prefer to drink it, I can remember so much about each one of them and I can twine the beverage into the story and use it to help build emotions in the novel.

Talking about it here lets my code out of the bag for careful readers of The Time of the Ghosts. My three superheroes, Lil, Mabel and Ann had a teenage apprentice, Cat. At one stage she helps prepare a dinner and she notes that the three women drink their after dinner coffee quite differently. If you look at how they prefer their coffee, you can see the whole of their food habits echoed, and that those food habits reflect their lives. Lil’s cup is filled with the most exotic beverage and the one that uses unusual ingredients. Mabel’s drink is practical and even ordinary. Ann’s drink is trendy and was the drink-of-choice for professional women the year I set it. I made each drink for myself throughout the novel, to help me focus on each character’s plotline

This helps me write the story, and it also helps the reader who likes to decode the way I like to encode. Lil’s main problem was dealing with the emotional burdens bequeathed to her by her exotic past and reaching a stage where she could move on. Mabel fought to remain ordinary and typical, even when she patently wasn’t. And Ann? Ann was about to retire and lose all the public service professional air she’d carried for so long. What would she drink when her life changed? Not even she knew.

I created those drinks (and the food that went with them) before I knew what the story would be. For this book more than any other, I needed to know.

Why was it coffee? A friend took me to Weston Park for research, and we had the best cup of coffee I’ve ever had in Canberra. The equal best now, for I had a just-as-nice one a few months ago. At that time I didn’t even know there was good coffee in a city I’d been living in for so very many years. I put Weston Park in the novel to celebrate my friend and her magnificent taste in children, small railways, and coffee. It’s not her fault Weston Park turned creepy, but it was to celebrate her that I made the drink of focus coffee rather than, say, after-dinner liqueurs.

This focus on the fineness of the palate and the joy hot drinks can bring is quite different to what I did with Langue[dot]doc 1305. I gave all the time travellers instant coffee. It was not only an obvious choice of beverage for time travellers, it was a very painful one for the team member who was Italian Australian and knew real coffee better than she knew the clothes she wore. To show how damaging the instant coffee was to her I gave her my favourite French cold drink in midsummer in France before she travelled into the past. She went from a gourmet (but troubled) present to a past that seemed drained of all the values (and coffee) she cared for. It was a very easy point to make.

I don’t know if anyone sees these things except me. I write them because they help me knit my story. When I faced the problem that Jewish characters in Australian fiction are generally seen as being very Eastern European, for example, in The Wizardry of Jewish Women, I dealt with it by using a teapot.

The family drink, the one that calmed life down when it needed it and which made everyone feel as if they were together and united, was tea. Tea made with loose leaves in a very particular pot. When Nick, the teenager, does something so special that his mother, Judith, thinks towards him “He is an adult–and a good one” she doesn’t say this. She lets him pour the tea from that pot. Judith will drink coffee and will make the children hot chocolate when they need to be calmed as children (for instance, should the Angel of Death be imminent, hot chocolate is the drink of choice) but that pot of tea is special.

For me, culture and personality can be expressed through hot drinks. I hope they help the reader. I’m going to make some tea for myself while I contemplate whether they do or not.

I won’t tell you what sort I’m making, for it’ll tell you too much about this moment. It’s much easier to let you see who my characters are through their choice of hot drink than to let you see who I am tonight, by telling you all about my own tea. I can promise you, however, that it’s very good tea indeed. And it’s impossible to judge me by dropping in tomorrow and asking for some, for this is the last of that variety. Tomorrow I’ll be a different person and my mind will be on different subjects. 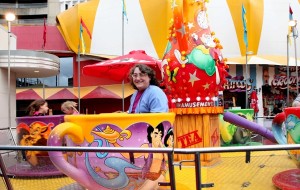 Gillian Polack writes fiction that others have trouble defining. Her novels range from kinda-sorta urban fantasy in The Wizardry of Jewish Women(a Ditmar finalist) to kinda-sorta time travel but probably alternate history in Langue[dot]doc 1305. She is a historian (mainly a Medievalist) and narrative specialist, which means she has written much non-fiction, the larger part of which has appeared as articles. Alas for the world, she is addicted to chocolate, sarcasm and bad jokes. Fortunately, she lives in Canberra, Australia (where she teaches, edits, writes, and cooks), which is too far from most of the world for these things to matter.