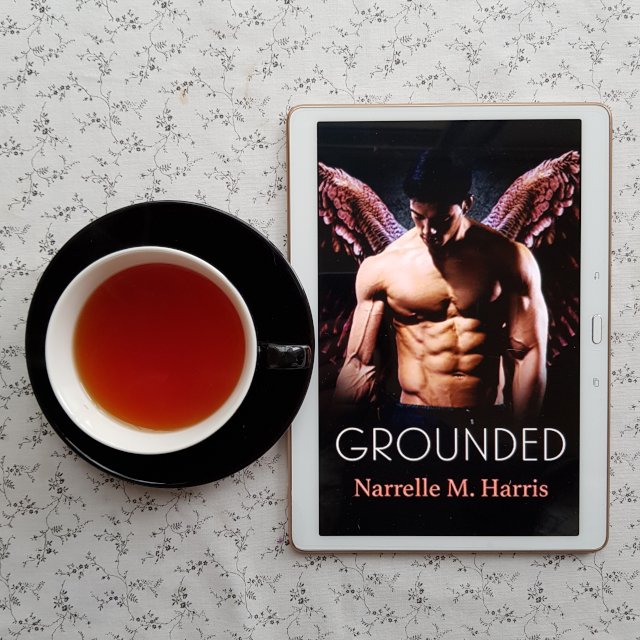 In a world where flight is life, will two grounded people find other ways to fly?

When Benedick Sasaki’s wings are wounded in the line of duty, the former policeman doesn’t know if he has a place in a world where he can no longer fly.

Then he meets Clementine Torres, an artist born without wings and a vocal advocate for the flightless who has been subjected to recent hate mail and vandalism ahead of her new exhibition. As Clementine starts to teach Benedick new ways to appreciate the world on the ground, the threats against her art and possibly her life begin to escalate.

To survive, they will need to teach each other that not all beauty is in the air, and that both of them can soar without wings…

Grounded is one of the best paranormal romances I’ve read. It is smart and sweet, with some fantastic worldbuilding and genuine warmth between the characters.

The book is set in an alternate world where humans have evolved from birds rather than monkeys. While this world looks much like our own, (and is, in fact, set in an alternate version of my home town) it is clear the author has put a lot of thought into the differences that manifest. Some of these are big things, like architecture and furniture–there’s not much call for elevators or chairs with backs. And some of these are small, like the jokes people tell and the slightly different turns of phrase. Then Harris goes a step further and imagines the challenges facing someone born without wings. This is not the same as being born a human as we would think of it. Instead, we’re shown what it would be like to live as a being evolved to have wings but doesn’t due to genetic defect. How does this body keep warm and protect its kidneys? How does one keep back musculature in shape? This is quite aside from the difficulties in getting around and finding clothes that fit.

These are the challenges that face Clementine. At first she comes across as quite an angry person–and this is certainly the impression she leaves Benedick with after their first encounter as neighbours. And there would be some justification for this, if it were true. After all, Clementine is forced to spend a lot of time fighting for the space to even exist. However, there’s so much more to her than that. Unsurprisingly, she has a strong sense of justice, fighting not only for herself, but for others as well. This is paired with an eye for wonder and beauty. Her disability means she sees the world from a different angle to most and she’s quick to share that with Benedick. She sees his suffering and generously steps in to help.

Benedick starts out as a bit of a mess. Having permanently injured one wing, he can no longer fly and is struggling to adjust to his new life–to the point where suicide has crossed his mind. However, he’s quick to seize the lifeline Clementine offers him, intrigued by his new neighbour and the joy she sees in this world. Like her, Benedick also has a strong sense of justice. When Clementine starts receiving death threats and her artwork is vandalised, he follows the particulars of her case and advocates for her when his former co-workers are quick to dismiss her.

One of the things I loved most about Benedick was the ways in which he works against ideas of toxic masculinity. He cries several times–on his own and in front of others–as he adjusts to this situation. This is never made a big deal of, but simply shown as a natural reaction. His relationship with his brother Peri is warm and supportive; their scenes together were some of my favourite (and I really hope that one day there might be a book about Peri meeting the man of his dreams).

This book really packs a lot into such a small space, examining disability and microaggressions… and sometimes straight-up discrimination and lack of consideration. However, the pacing never feels too slow and there’s a nice synergy between the development of Clementine and Benedick’s relationship and the bigger issues. If I had one quibble, it’s that the resolution of Clementine’s case was a bit predictable, but that did not in any way detract from my enjoyment of the book.

I’d really like to read more paranormal romance of this calibre and to see more of this world, so I shall be hoping for future books from this author.