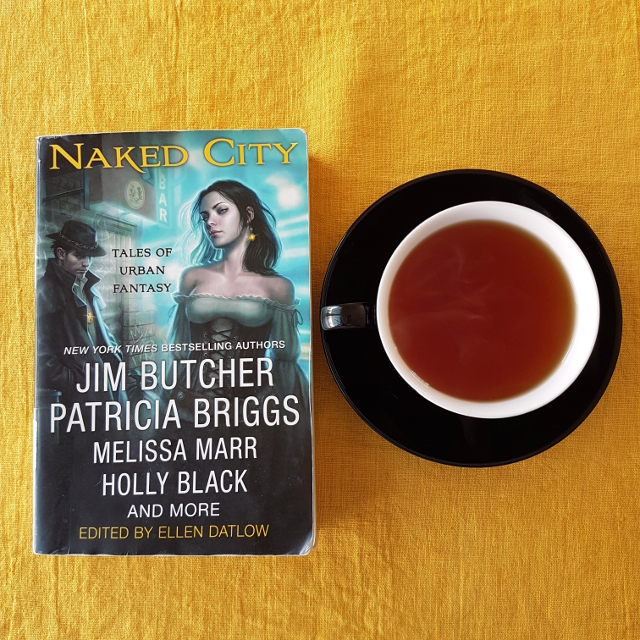 In this thrilling collection of original stories, some of today’s hottest paranormal authors delight, thrill, and captivate readers with otherworldly tales of magic and mischief. In Jim Butcher‘s “Curses”, Harry Dresden investigates how to lift a curse laid by the Fair Folk on the Chicago Cubs. In Patricia Briggs’ “Fairy Gifts”, a vampire is called home by magic to save the Fae who freed him from a dark curse. In Melissa Marr‘s “Guns for the Dead”, the newly dead Frankie Lee seeks a job in the afterlife on the wrong side of the law. In Holly Black‘s “Noble Rot”, a dying rock star discovers that the young woman who brings him food every day has some strange appetites of her own.

Featuring original stories from 20 authors, this dark, captivating, fabulous, and fantastical collection is not to be missed!

Naked City is a decent anthology, but one I felt failed to live up to its potential.

I had two major criticisms of the anthology. The first was that some of the stories were merely set in a city, rather than engaging with the city as a character in its own right. While perfectly readable, and often decent stories, they do nothing to give the reader a sense of place.

The other criticism is the lack of diversity among the cities featured. Of twenty stories, twelve were set in the USA, with half of these being set in New York City. Of the remaining eight, half were set in secondary world cities. Leaving just four stories set in real cities outside of the US. This was particularly disappointing because these latter stories were often highlights of the anthology. Lavie Tidhar’s story The Projected Girl was a beautifully evocative story set in Haifa, Israel, in which a young teenage boy discovers a mystery that sends him delving into the past. Pat Cadagan’s story Picking Up the Pieces also sends the reader delving into the past, back to the fall of the Berlin Wall as a woman travels to the city to rescue her flighty sister.

Despite these criticisms, the stories remain reasonably solid. Being Ellen Datlow, the tone tends towards the dark, veering into outright horror in a few cases. However, there remains a decent balance. Following up Peter S. Beagle’s Underbridge (yet another tale from Beagle about a self-absorbed, middle-aged male academic who crosses ethical boundaries) with Naomi Novik’s somewhat manic Priced to Sell (a charming tale about selling real estate in Manhattan to supernatural clients) was an especially nice touch.

I also enjoyed the inclusion of a few stories that looked at cities from a slightly different angle. The Bricks of Gelecek by Matthew Kressel was an interesting meditation on creation and destruction through the viewpoint of a being whose nature is to annihilate cities. And Nathan Ballingrud pairs the concept of being haunted by a city with a poignant portrayal of post-Katrina New Orleans in The Way Station.

All in all, Naked City was a competent anthology but ultimately forgettable.