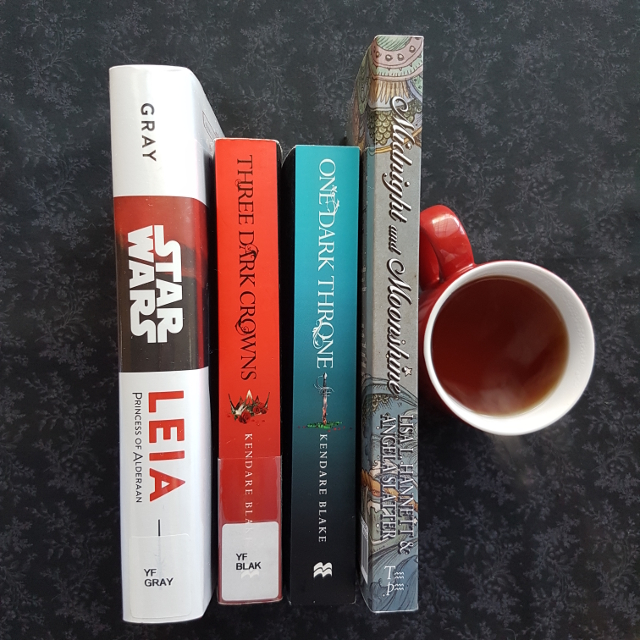 September is traditionally a difficult month for me due to the sheer number of personal and professional commitments I have. This year was certainly no exception, leading to my poorest month for reading so far this year. What reading I did tended towards light romances.

Speaking of which, my goals to borrow at least one book from the library and to read one piece of fanfiction each month continue to go well.

131. Dirty by Kylie Scott. The first in the Dive Bar series of m/f romance. When someone sends Lydia a video of her groom-to-be getting intimate with his best man, she hot-foots it out of the wedding and into the home of an unemployed musician. One thing I have to say about Scott is that she’d not afraid to put her heroines in humiliating positions. It was a good read, but the gay rep left me rather disappointed.

132. When Dimple Met Rishi by Sandhya Menon. Dimple and Rishi are two Indian-American teens who meet at a camp for aspiring tech developers. Their parents have arranged their marriage… but no one has told Dimple. Needless to say, Dimple isn’t impressed with Rishi introduces himself as her future husband. This is an adorable romantic comedy that I absolutely loved.

133. The Bromancers by Tansy Rayner Roberts. Third in the Belladonna University series, listened to via Sheep Might Fly. With exams done, the band head out to play at a local music festival. Body-snatchers and the unexpected arrival of the band’s significant others ensure shenanigans ensue. Although light-hearted, it touches on some serious issues. I particularly enjoyed the developments in the relationship between Sage, the band’s drummer, and Jules, snooty friend to the band’s roommate.

135. Hate to Want You by Alisha Rai. The first in the Forbidden Hearts series of m/f romance. A family feud destroyed the relationship between Livvy and Nicholas, but every year on Livvy’s birthday the pair have a one-night stand in a different city. Until last year. Now, Livvy has returned to their home town and the pair are drawn back to each other and into their families’ drama.

136. Lick by Kylie Scott. The first in the Stage Dive series of m/f romance. After getting roaring drunk in Vegas on her 21st birthday, Evelyn wakes up to discover she’s married the lead guitarist of a popular band. Fun, but not Scott’s best work.

138. Playing by Her Rules by Amy Andrews. The first in the Sydney Smoke Rugby series of m/f romance. In order to get promoted to a feature writer, journalist Matilda is forced to conduct a series of interviews with her ex-boyfriend, the captain of the local rugby team. Again, entertaining but nothing brilliant.

139. Undiscovered by Anna Hackett. The first in the Treasure Hunter Security series of m/f romance. Dr Layne Rush has just made the discovery of a career… but it could also mean the end of her life when her dig site is raided by unscrupulous treasure hunters. Her bosses bring in Declan Ward and his team to run security on the site. Somewhat shallow in terms of characterisation, but fun, with several nods to Indiana Jones.

Check, Please by Ngozi Ukazu. I know, I’m late to the party on this one. It’s an adorable web comic about a former figure-skating champion who joins the ice-hockey team at his university in his freshman year and falls in love with the captain. If you like sweet romances and found-family feels, this is definitely something to check out.

Finest in Fairford by bluepeony. A coffee shop Harry Potter AU where Remus works quite happily in Lily Potter’s cafe until a mysterious stranger called Sirius starts leaving him notes on his receipts. This rec from Radio Free Fandom is short and sweet.