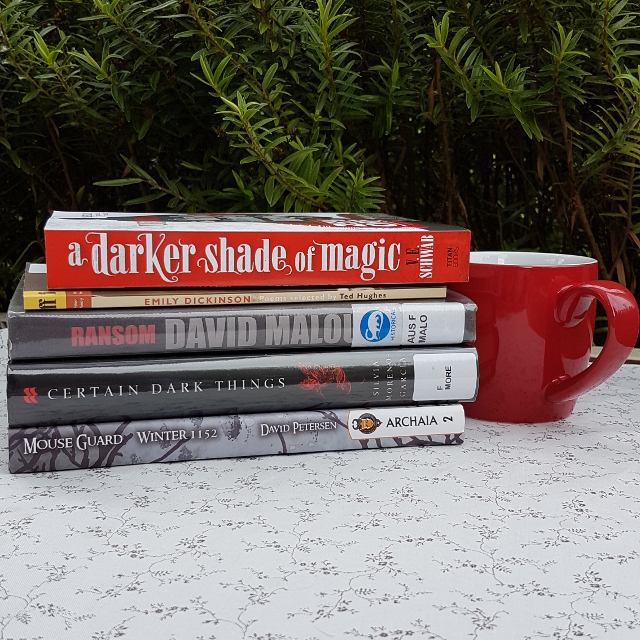 March was the first full calendar month where I didn’t have any reading to do for the Aurealis Awards. My reading rate subsequently took a plunge, but I remain happy, especially since there were a lot of good books this month. And things are likely to pick up again, now that the shortlists for the Hugo Awards have been released.

One of my personal reading challenges this year was to make at least one trip to the library per month. This month I managed two trips, picking up Not Your Sidekick by C.B. Lee, Crossroads of Canopy by Thoraiya Dyer, Certain Dark Things by Silvia Moreno-Garcia, and Chaos Choreography and Magic for Nothing by Seanan McGuire.

56. Dances, Princes, Dance by Tansy Rayner Roberts. Listened to via the Sheep Might Fly podcast. Second in the Castle Charming series. The princes keep mysteriously vanishing from the castle and someone has run up an enormous bill for dancing shoes on the king’s account. The Hounds must get the bottom of what’s going on, but things are always more complicated when there are fairies involved. Sheer fun. I adore the various relationships between the characters.

57. Penric and the Shaman by Lois McMaster Bujold. Reviewed here.

59. Binti: Home by Nnedi Okorafor. Sci-fi novella sequel to Binti. Having completed her first year at university, Binti returns home to take a pilgrimage. I didn’t find it quite as gripping as the first, but it shows the fallout from the previous book quite well, particularly in terms of Binti’s mental health and the changes in her family’s dynamics.

60. When A Scott Ties the Knot by Tessa Dare. Historical romance. Read for Sisterhood of the Travelling Paperback podcast. A fairly standard sort of romance, though it does touch on a number of interesting issues.

62. Chaos Choreography by Seanan McGuire. The fifth book in the InCryptid series. Verity thought she was done with ballroom dancing and her life outside of cryptozoology. However, when she gets a chance to stage a comeback on a reality TV show, she can’t refuse. She also can’t help notice the way her fellow dancers are disappearing after they’re eliminated from the show. I found some of the mystery elements a bit weak but it does a great job of holding tension and I enjoyed it more than the previous book in the series.

63. Not Your Sidekick by C.B. Lee. Read for the Sisterhood of the Travelling Paperback podcast. Jess’s parents are minor league superheroes, her sister is in training with her superhero idol and her brother is a genius. At 16, Jess is rapidly giving up hope of manifesting powers and takes on an internship at a local tech company. Then she discovers it’s a front for her parents’ villainous rivals. This is a fantastic YA book with a diverse cast and a cute f/f romance at its heart. The ending wobbles a bit, but overall I really enjoyed it.

64. Mouse Guard: Winter 1152 by David Petersen. A graphic novel about anthropomorphic mice. The failed uprising has left the Mouse Guard’s stronghold in a vulnerable position. Several guard mice are forced to travel through the snow to distant communities for supplies. A dark story with exquisite artwork (and terrible poetry).

65. Beyond Temptation by Kit Rocha. Post-apocalyptic erotica. A short novella set between the third and fourth books of the Beyond series. More than anything, hacker Noah Lennox wants to know his childhood friend Emma is safe–no matter what the cost. However, Noah’s secrets put them both at risk. Both Emma and Noah have cropped up in other books, so it was nice to see their story get told. I particularly appreciated that, despite Noah’s efforts, Emma was more than capable of protecting herself.

67. Beyond Jealousy by Kit Rocha. Post-apocalyptic erotica. Fourth book in the Beyond series. Rachel, Ace and Cruz have been circling each other for the last three books. Can they make their trio work? Or will someone get their heart broken? Meanwhile, could Rachel’s father be the one making life more difficult for the O’Kayne gang? So refreshing to see a love triangle be resolved with a positive portrayal of polyamory. I also appreciated that it wasn’t all about the sex (although there was plenty of that), but that the emotional component was given plenty of space.

DNF The Dispossessed by Ursula Le Guin. Picked up to read along with the Sisterhood of the Travelling Paperback podcast. As usual, Le Guin explores some fascinating ideas. However, I just couldn’t find the emotional connection I needed to stick with it.

If the Apocalypse Comes, Text Me by relenafanel. This Captain America/Buffy crossover came to me via Claire Rousseau. When Captain America miraculously comes back to life after being trapped in an iceburg, Bucky the Vampire Slayer is sure he knows what’s going on. Too bad Captain America has to be so hot. An entertaining crossover with some witty sections, but ultimately not enough emotional depth to satisfy.