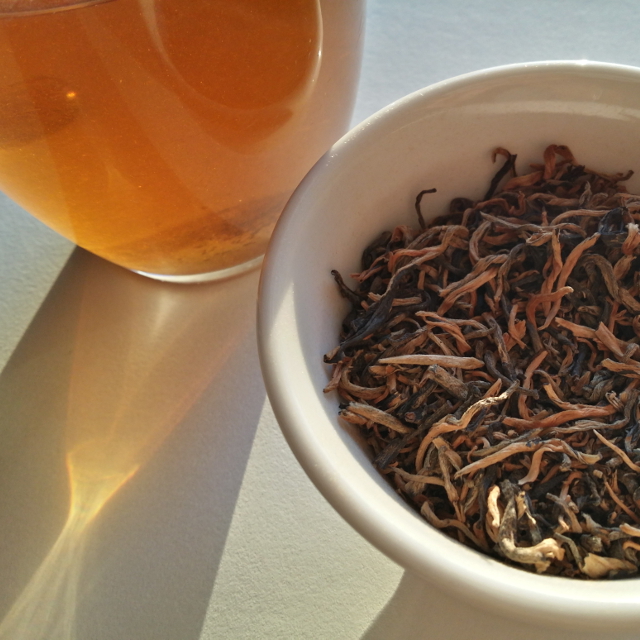 Loose-leaf Links is a feature where I gather together the interesting bits and pieces on sci-fi and fantasy I’ve come across and share them with you over tea.

The tea for this edition is Golden Mao Feng from Adore Tea. It’s a lighter tea than I often drink, perfect for sunshiny afternoons, and likely to appeal to lovers of Darjeeling.

The Hugo Awards circus is in full swing at the moment. Two of the finalists have withdrawn and replacements have been named. I’m particularly thrilled to see feminist SFF blog Lady Business step onto the ballot for Best Fanzine, as I’ve been a fan of their work for a while. If you’re voting or just interested in what they do, they have included a list of sample posts on their announcement of the nomination.

Meanwhile, there are plenty of reaction posts. Cora Buhlert offers an excellent round-up both before the finalist withdrawals and after.

While you might be forgiven for thinking the Hugo Awards are the only thing happening on the SFF scene at the moment, there are a few other items of note. The shortlist for the 2016 Arthur C. Clarke Award has been released and looks excellent.

LGBTQ publisher Riptide Publishing earned the ire of romance circles for the racist content of one of their books. They have issued an apology and are instating the use of sensitivity readers (though there are some concerns about the rate at which these readers will be paid).

Mary Robinette Kowal chimed in with an excellent post on why sensitivity readers are necessary and some of the consequences of using them.

BookRiot has a list of 100 must-read SFF novels by female authors.

Over at Fantasy Cafe, Elizabeth Bonesteel discusses moving beyond writing in gendered stereotypes.

A reminder that submissions for Ticonderoga Publishing’s Ecopunk anthology open next week.

LoveOzYA have a round-up of links on why copyright proposals and parallel importation will hurt the Australian publishing industry. Authors are encouraged to make their own submission to the Productivity Commission or add their name to the LoveOzYA submission.

M. Harold Page has a brilliant 5-point checklist for when you find yourself suffering from writer’s block.

Donna Maree Hanson writes about her foray into print on demand.

Amanda Pillar, author of Graced and Captive, has just launched a mini collection of work called Dancing with Demons.

With Nnedi Okorafor’s novella Binti nominated for a Hugo Award, Tor.com have announced they will be releasing two more related novellas.

Jay Kristoff and Amie Kaufman are currently off touring the US, but they have plenty of work waiting for them when they get back with the announcement that they will be writing a new series together.

Unfortunately, all good things must come to an end. SF Signal is shutting down after 13 years of service to the SFF community.