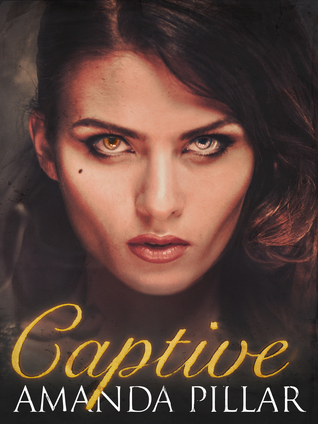 Vampires, werewolves, and the Graced are at war with their human creators, and humanity is losing. But one girl might hold the key to salvation. Held captive with her fellow humans by alpha Wolfgang and his pack of weres, Laney secretly inches ever closer to breaking were and vampire blood dependency forever.

But Laney doesn’t have long. Their numbers decimated by plague, humans are being kidnapped and reduced to livestock. And when Laney and her sister are kidnapped by a neighboring vampire clan notorious for its “farming” of humans, their only hope lies in Wolf — who doesn’t know the shocking secret Laney has gone to great lengths to conceal.

With their lives and the future of humanity in the balance, can Laney and Wolf learn to trust each other before their races cease to exist?

Captive is a prequel novella to Amanda Pillar’s Graced. Given the latter was one of the highlights of my 2015 reading year, I had high hopes for Captive. Unfortunately, I found the novella’s ambition exceeded its scope.

The key problem with Captive is that it tried to do too much: it aimed to be a paranormal romance and an exploration of a post-apocalyptic world, as well as show a pivotal point in the world’s history and be an origin story for one of the characters from Graced. All within 100 pages. As a result, it doesn’t successfully manage any of these elements.

I didn’t find there was much chemistry between Laney and Wolf, with their on-stage courtship being limited to Wolf invading Laney’s personal space and kissing her a few times. The secondary relationships were far more entertaining. Laney’s sister Jane lacks a romantic bone in her body, so it was particularly amusing to see attempts to woo her. I hope we may see something more of her in the future.

As a fantasy story, it didn’t quite work for me either. It’s always difficult to write short speculative fiction because the premise and feel of the world needs to be conveyed in not much space. Captive faces a difficult challenge because it’s set in a world that isn’t our present day or the far future of Graced but something in between. A prologue in the form of a character’s diary entry tries to set the scene but ends up feeling like an awkward infodump that left me without a visceral feel for the world. Since the pertinent information comes up again later–repeatedly, in some cases,–I feel it would have been better to put the prologue’s word count to better use within the story itself.

Despite my criticisms, I enjoyed the story a lot. While the diversity of the characters isn’t as broad as in Graced, it is still casually present. Laney makes a great character. Physically, she’s never going to be a Strong Female Character, which makes her quiet courage all the more admirable. I also enjoyed seeing one of the characters from Graced make an appearance in the final chapters, albeit in a much younger form.

While Captive could conceivably stand on its own, some of the impact of the events it depicts would be lost. New readers are best off picking up Graced first.

5 thoughts on “Captive by Amanda Pillar”