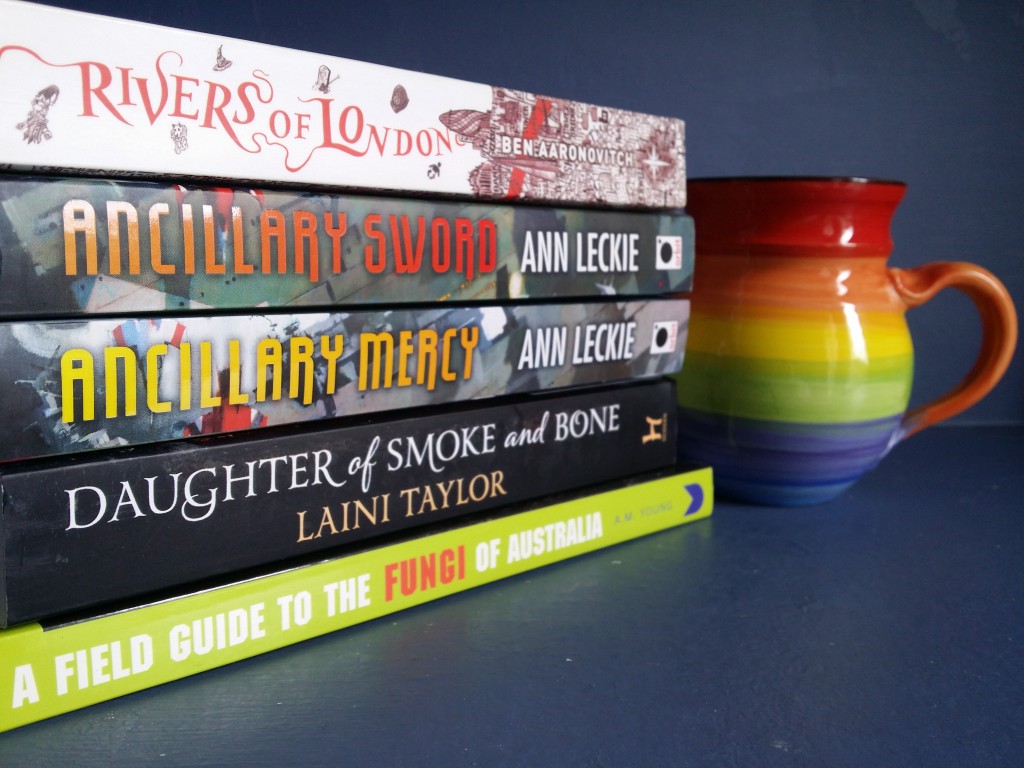 I’ve had an excellent start to my reading this year. It surprises me a little because I had a deadline and a book of short stories that slowed me down. There is just something about collections of short stories that refuses to let me rush. However, I made up for lost time in the last week of the month.

Andi is running monthly check-ins for the #ReadMyOwnDamnBooks challenge (there’s still time to join!), so I’ve decided it would be useful to take a look at my progress as part of my usual TBR reports. My goal for the challenge was to make sure 60% of the books I read this year is from Mt TBR. I’m currently sitting on 55%, which I feel isn’t a bad effort. I started out well. Then I was gifted with tickets to Contact2016 (eeee!!! I’m going to NatCon!), and I felt it was necessary to be familiar with work by the Guests of Honour. Leife Shallcross was lovely enough to loan me her entire Ben Aaronovitch collection.

If you’re interested in seeing which of my reviews fit the #ReadMyOwnDamnBooks challenge, be sure to check out the tag.

3. In the Devil’s Nebula by Anna Hackett. Reviewed here.

4. Much Ado About Love by Elizabeth Dunk. Reviewed here.

5. The Seduction of Lord Stone by Anna Campbell. Review forthcoming.

6. Hear Me Roar edited by Liz Grzyb. An anthology of short feminist SFF stories I read in order to prepare my Ditmar nominations. There were a couple of stories I didn’t really enjoy, but that’s usual for an anthology. All the stories were of an excellent standard and I thought the balance of sci-fi and fantasy stories was great.

7. Hunter Forsaken by Nancy Corrigan. The sequel to Hunter Deceived. I can’t say I liked it any better. The dialogue was cringe worthy in places and the plot wasn’t very solid.

9. Rivers of London by Ben Aaronovitch. A junior police officer discovers there’s more to London than he ever expected when he accidentally tries to interview a ghost about a murder the ghost witnessed. This book was a lot of fun and reminded me a little bit of Terry Pratchett’s Watch series crossed with Neil Gaiman’s Neverwhere (or possibly J.K. Rowling’s Harry Potter).

DNF – Dark Child (Bloodsworn) Episode One by Adina West. The first part of one of Momentum’s serials. What I didn’t realise was that it was the serial of the third book in a series. The summary sounded so full of melodrama that I didn’t make it past the first few pages of the story. I suspect it would have been okay if I’d bought in from the beginning of the series, but jumping into the middle like this really didn’t work for me.

A Field Guide to the Fungi of Australia by A.M. Young
Passionate Marriage by David Schnarch
Ancillary Mercy by Ann Leckie
Daughter of Smoke and Bone by Laini Taylor
Take Me As I Am Charmaine Ross