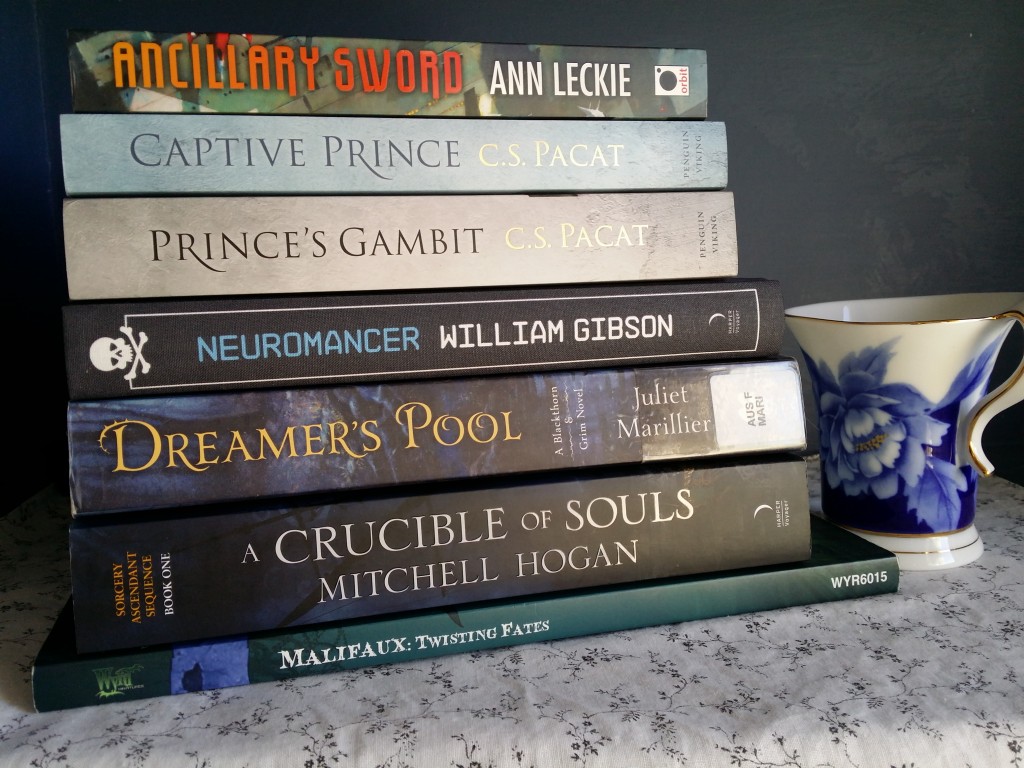 September saw me power through the books for the second month running. This is probably a good thing because there was an influx of books in the last few days of the month and October holds the temptation of the dealers’ room at Conflux.

51. Ten Simple Steps to Surviving the Apocalypse by Cari Z. A short m/m romance set after the zombie apocalypse has erupted on Earth. Javi is just looking to avoid trouble and get safely to his family’s secluded cabin. However, trouble finds him in the form of Conrad, a man as deadly as he is sexy–and infected with the zombie virus. A sweet, but suspenseful read. Told from Javi’s wise-cracking but vulnerable POV, it reminded me of Alis Franklin’s work and was equally fun to read.

52. The Court of Five Thrones by Pia Foxhall. If you’ve been following my Mt TBR reports for a while now, you’ll know I’ve been reading this online. However, since it has a shiny cover and a listing on Goodreads, I feel I’m justified in including it as one of the books I’ve read this year.

53. Stormbringer by Alis Franklin. The sequel to Liesmith. Lain ducks back to Asgard for a quick visit, but of course nothing goes to plan. Fewer horror elements this time around, but digs more deeply into the themes of equality. The sense of humour remains strong and Australians will get an especial kick out of some of the jokes. Highly recommended.

56. Deeper Into the Woods by Pia Foxhall. The first in Pia’s The Fae Tales Verse. Like The Court of Five Thrones, I read this one online but am including it among my books for the year. The story shows Gwyn and Augus’ very first encounter–a fraught beginning to a fraught relationship. I enjoyed seeing how far they have come.

57. Malifaux: Twisting Fate by Wyrd Games. This is a manual for a tabletop skirmish game. It includes some stories along with rules for new models, introducing some new twists on Malifaux’s existing characters.

58. A Crucible of Souls by Mitchell Hogan. Reviewed here.

59. Dreamer’s Pool by Juliet Marillier. I’m a huge fan of Marillier, so not surprised I loved this. It is different from her usual stuff: it is darker and has more adultish-themes. Contains a fantastic platonic relationship between the female and male characters, and also has a strong focus on violence against women. All within a historical fantasy setting. It was the winner of the 2014 Aurealis Award for Best Fantasy Novel and I can see why. Highly recommended.

60. Prince’s Gambit by C.S. Pacat. The second in the Captive Prince series. No middle-book sag here! It ratchets up the tension nicely and leaves the reader in suspense. I’m very grumpy that I have to wait until February for the next one.

61. One Hundred Great Books in Haiku by David Bader. As with most humour, some of these poems were very witty while others misfired. I think my favourite may have been The Odessey.


Game Theory by Pia Foxhall
A Trifle Dead by Livia Day
Neuromancer by William Gibson
Ancillary Sword by Ann Leckie
Steeped by Annelies Zijderveld
The Hero and the Crown by Robin McKinley
Malifaux: Storm of Shadows by Wyrd Games

The Court of Five Thrones Ch 56- 59 by Pia Foxhall. A satisfying conclusion to the tale.