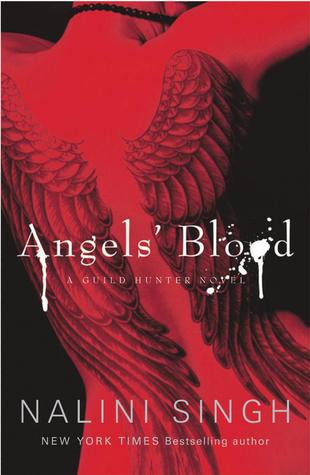 Vampire hunter Elena Deveraux knows she is the best–but she does not know if even she is good enough for this job. Hired by the dangerously beautiful archangel Raphael, a being so lethal that no mortal wants his attention, Elena knows failure is not an option–even if the task is impossible.

Because this time, it’s not a wayward vamp she has to track. It’s an archangel gone bad.

The job will put Elena in the midst of a killing spree like no other–and pull her to the razor’s edge of passion. Even if the hunt does not destroy her, succumbing to Raphael’s seductive touch just might. For when archangels play, mortals break.

Making an active choice to read diversely may be considered a political act, but the real reason I do it is to discover awesome authors who are new to me. Last year, Diversiverse introduced me to Ambelin Kwaymullina. This year, it is Nalini Singh.

Like Kwaymullina, Singh is an author I consider as diverse who also writes about diverse characters. Elena has Moroccan ancestry, her fellow Guild Hunter Ransom has Cherokee blood and her best friend Sara has Middle Eastern heritage. Even the angels are far from uniformly white, coming from all over the globe as they do. They’re not even majority white. And best of all, this isn’t a big deal but simply ordinary for Singh’s New York.

Angels’ Blood is urban fantasy through and through. Elena is a pretty typical Strong Female Character: she is a fighter, a born Hunter who has the ability to scent vampires. She tracks down escaped vampires and returns them to their angel masters. Elena is good at her job and likes to get up close when neutralising her prey. That becomes difficult when she is hired by the archangel Raphael to track down another archangel on a murder spree–getting up close will surely kill her.

I liked Elena. Raphael teases her for being a prude, but that was one of the things I appreciated about her. She maintains strong boundaries. The one time Raphael enters her apartment–her haven–uninvited, she shoots him. Despite being no match for his power, she continues to struggle against his manipulation of her mind. I appreciated the way that in explaining why this invasion of her mind is unacceptable she makes a direct comparison with rape. She is not afraid to call things as she sees them… or, rather, sometimes she’s afraid, but she does it anyway. She is uncompromising in who she is.

Singh does an excellent job with keeping her archangels dangerous. She makes it clear that they are not human, despite their appearance. They are physically strong and have powers that humans could only dream of. And let’s not forget the wings. Each archangel rules over their own part of the globe. Some archangels look down on their human subjects as beneath them, while others simply fail to understand basic human concepts, such as privacy and consent. As the story progresses, Raphael becomes less alien and more human, but there’s also an excellent reason for this woven into the plot.

Angels’ Blood is a bit of a dark book in places. If torture, body parts and copious amounts of blood aren’t your sort of thing, you may want to steer clear.

However, overall, I found it an enjoyable read. The sexual tension between Elena and Raphael was fantastic and balanced nicely with the plot. The denouement was a little deus ex machina for my tastes, but paves the way for a sequel I’m definitely interested in reading.