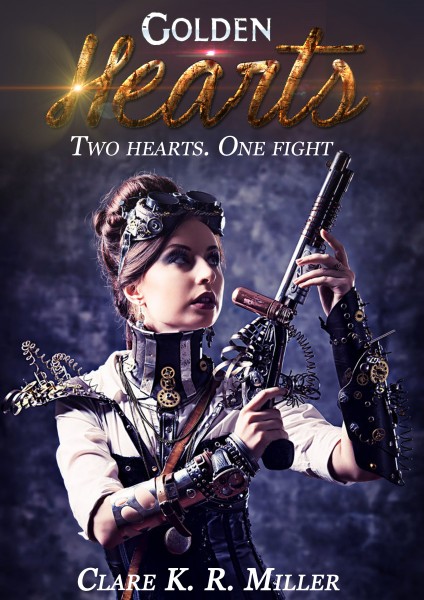 Covers and Tables of Contents

Clare Miller has reissued her steampunk f/f romance Golden Hearts with a new cover (seen above). I, for one, love the shiny!

FableCroft Publishing have announced the table of contents for their Cranky Ladies of History anthology. I spy some interesting names both among the authors and the subjects.

Also, Twelfth Planet Press have announced the table of contents for their Year’s Best YA Speculative Fiction 2013. If you enjoyed Kaleidoscope, it might be worth keeping your eye out for this one.

The winners of the 2014 World Fantasy Awards were announced at the beginning of the month.

Closer to home, nominations for the 2014 Aurealis Awards close on 7 December. If you are an Australian speculative fiction writer with work published in 2014, you’d better get in quick! Also, if you are self-published and think this doesn’t apply to you, think again. Last year, Mitchell Hogan‘s self-published story A Crucible of Souls beat out work by Max Barry, Garth Nix, Tansy Rayner Roberts and duo Amie Kaufman and Meagan Spooner to win Best Fantasy Novel.

Having only just recently announced the table of contents for their Year’s Best Australian Fantasy and Horror 2013 anthology, editors Liz Grzyb and Talie Helene are already hard at work on the 2014 edition. Nominations are open until 20 January 2015.

If you’re a regular reader here, you’ll know I have an interest in portrayals of diversity in speculative fiction. So I was delighted when Lynn O’Connacht posted a list of speculative fiction books with (presumed) asexual characters. She’s also looking to add to the list, so if you have some suggestions, head on over.

Jodi Cleghorn has shared how cut-up poetry helped her deal with depression.

I mentioned last month that Macquarie University conducted a forum in which they discussed a range of topics regarding the changes to the Australian publishing industry with a number of authors. Australian Author Online have released another part of their series on this study, focussing on author contact with readers.

Gillian Polack has posted the first in what promises to be an interesting series on the needs hierarchy and handling writer’s block.

And, just for fun, I recently came across an article published by the British Medical Journal in 2005 entitled The case of the disappearing teaspoons: longitudinal cohort study of the displacement of teaspoons in an Australian research institute. From the discussion:

Somewhere in the cosmos, along with all the planets inhabited by humanoids, reptiloids, walking treeoids, and superintelligent shades of the colour blue, a planet is entirely given over to spoon life-forms. Unattended spoons make their way to this planet, slipping away through space to a world where they enjoy a uniquely spoonoid lifestyle, responding to highly spoon oriented stimuli, and generally leading the spoon equivalent of the good life.

So if you made that cup of tea before you started reading this post, you might want to keep an eye on your teaspoon.