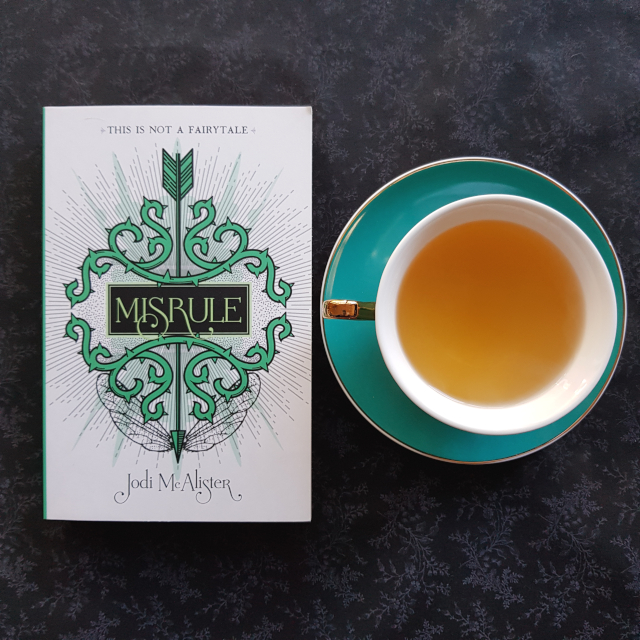 Things that happen sometimes when your boyfriend is a magical fairy prince: he gets kidnapped by his older brother and whisked away to fulfil his destiny in their magical fairy kingdom.

But Pearl Linford is not having that. It’s time for a rescue mission. Pearl told Finn she was coming to get him and she’s not going to let anyone stand in her way.

But will Finn want to be saved? And even if Pearl can work out how to tear a hole in the universe, how many people will die before she can get to him?

Ironheart left off on a terrible cliffhanger. Having been forced by the Seelie Prince to choose between saving her boyfriend, her best friend and her previously-unknown twin sister, Pearl opts to save her best friend. Misrule picks up more or less immediately afterwards. Pearl and Phil make it back to Phil’s place only to discover Phil’s mother has been murdered by the Riders. This sets the tone for what is the darkest book of the trilogy.

The trope of “I didn’t call the cops because I didn’t want them to think it was me” is really not a favourite trope of mine and I wasn’t super sold on it here, either. However, it does play into the exploration of Pearl’s traumatisation and her increasing paranoia. One of the things I liked about Ironheart was that it showed the scars that were left on Pearl. Misrule continues this and even builds on it, showing ways in which Pearl claims her trauma (or parts of it, at least) and turns it into her power.

Also, is it really paranoia if people are actually out to get you? In the previous books, the fae mostly confined their reign of terror to the outdoors. Misrule takes it to the next level by bringing that violence indoors, showing that nowhere is out of their reach. And while the previous books haven’t been shy about blood splatter where it’s warranted, readers can expect a bit more gore this time around.

Once again, the relationships are what really makes the book. Finn is sidelined for much of the book, allowing Pearl’s relationship with Phil to take centre stage. It was very satisfying to see the two reconcile as Phil comes to realise Pearl had good reasons behind her actions in the previous books. However, I also appreciated that this reconciliation wasn’t easy or smooth. Phil has been through trauma of her own–most recently the loss of her mother–and that colours how she interacts with Pearl in a way I found realistic. I also really enjoyed seeing a moment of connection between Pearl and Holly-Anne. Although the two are never going to be besties, it was nice to see them recognise the common ground they share.

Pearl’s relationship with Cardie also shifts in Misrule. As Pearl begins to come into her power, Cardie acts as Pearl’s conscience, voicing some valid concerns about the ways in which she uses that power. I’m a bit of two minds as to this thread of the story. On one hand, I feel that perhaps Pearl isn’t made to feel the consequences of her actions as strongly as perhaps she should. On the other, I was pleased to see that Pearl wasn’t punished for being a woman with power. Having Cardie voice concerns is an acceptable middle ground, but not one I felt entirely satisfying.

Speaking of Cardie, it was also nice to see a connection made between the way faeries abduct children to leave behind changelings and the impact the Stolen Generation had on Cardie’s family. It isn’t delved into deeply, but the acknowledgement of that parallel seemed important. It also tapped into a bit of racism on the part of the fae, as Finn notes Cardie’s counterpart in the fae realm looks nothing like him, barring skin colour.

Overall, I found Misrule to be the weakest book of the trilogy, with elements of the plot a little muddier than its predecessors. I must own that could be down to the circumstances of my reading, as I powered through the entire trilogy in two days and was perhaps not as lucid as I usually am. However, I feel this is a testimony to the trilogy’s ability to hook me in and keep me glued to the page, aided by some excellent pacing. There is space for more stories set in this world and I very much hope to see them at some point in the future.