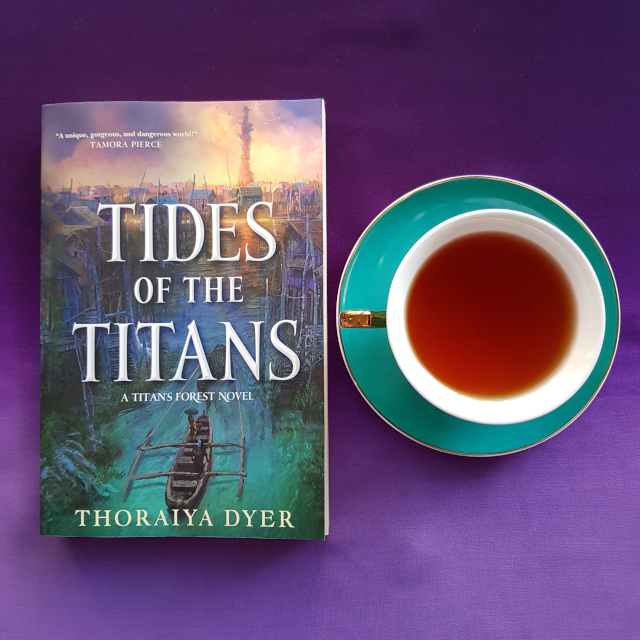 Courtier, explorer, thief: Leaper is a man of many skills, but none of his talents satisfy the yearning in his heart for the Queen of Airakland, the ruler of a thunder-clashed kingdom.

Their affair is cut too short, however, when she is murdered. But who was the assassin? A political rival? The jealous king? Or, perhaps, the god of thunder who oversees them all?

Distraught, Leaper vows revenge, but little does he realize that his mission will lead him away from his forest home, across the vast floodplains, and to the edges of time and myth itself.

Tides of the Titans takes the already epic world of Titan’s Forest and throws it wide open, following Leaper on a far-ranging quest for revenge.

Each book of the series so far has featured a new character. Leaper is the younger brother of Imeris, the protagonist of the second book, and also the reincarnated soul of Unar’s sister from the first book. So, even though there are different characters, they remained tied together by bonds of family. Imeris and Unar both make appearances in Tides of the Titans.

One of the real strengths of the book is the fully developed world. The bulk of the story is set ten years after the previous book and there’s a sense that reoccurring characters like Imeris and Unar haven’t just been sitting around, but have been getting on with their lives, even encountering new problems. Throughout his journey, Leaper encounters many new people and it felt like any one of them could set off on a new quest at any moment, or even that they were already on their own quest which just happened to intersect with Leaper’s.

In keeping with the tradition of the series, Leaper is if not unlikeable, then certainly flawed. He’s a pretty arrogant character, content with his cleverness. He’s also not overly cautious, prone to fits of temper, and not very loyal… although, in fairness, few have been loyal to him when they should have been. And his arrogance has perhaps been somewhat earned, as he is a very competent spy and thief. I particularly enjoyed the way he connects his personas to forest imagery, picturing plants that embody the traits he seeks and using that to fuel the way he moves and behaves.

Like the previous books, Tides of the Titans also continues to be influenced by Greek myth. Leaper is our Odysseus, silver-tongued and too clever for his own good, cursed by a god and just trying to get home. Readers familiar with the Odyssey will notice nods throughout the story, including the Bag of Winds and even a cyclops of sorts. However, this is far from a straight retelling and these elements are always given their own unique twist.

Being so strongly influenced by the Odyssey, Leaper encounters a lot of characters in passing. However, most of them don’t stick around for very long, making it hard to form an emotional connection with the story, especially when Leaper’s own behaviour can be a bit erratic at times and he is blown from place to place. The story is much less about the personal journey than about the story of the wider world. As Leaper travels, he uncovers the story behind the gods and Titan’s Forest itself. He quite literally sees the footprints of the gods on the world.

However, while the people don’t stick around, we do see a number of different cultures, and the book continues to explore the colonialist themes of the series. Right from the get-go, the citizens of Floor are shown as being far from a monolith. There’s also some delving into the theft of culturally significant artefacts.

Despite being the potential conclusion of the series, Tides of the Titans doesn’t wrap up into a neat ending. People continue to suffer and there are no happily-ever-afters, just new challenges. It is a segment of history and of people’s lives, not a fairy tale.

All in all, Thoraiya Dyer has produced another nuanced and thoughtful story in Tides of the Titans.