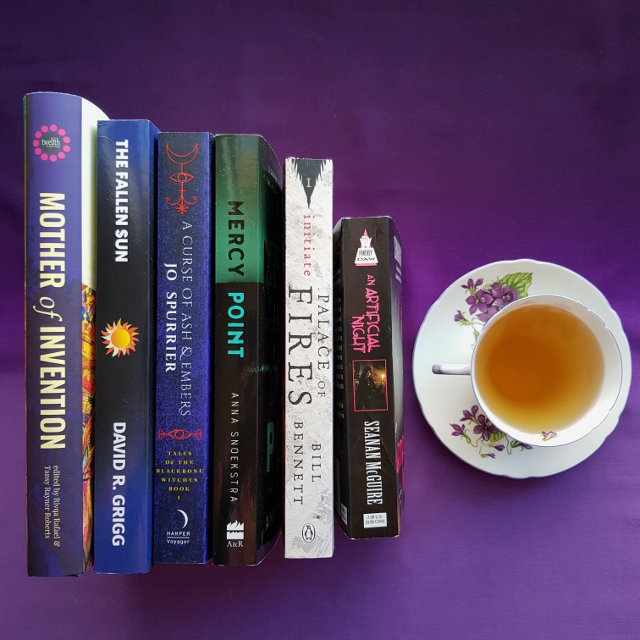 September went a long way towards getting my Mt TBR back under control. I knocked out some shorter bits and pieces in the first half of the month. I was ill for much of the second half and reading proved to be a good distraction.

103. Akata Witch by Nnedi Okorafor. First of the Akata Witch series. This YA novel is set in Nigeria and is about a young albino girl comes to terms with her magical heritage. It felt a bit episodic in places, though that fades as things ramp up towards the end. I read the sequel first and was surprised to find this didn’t provide as much set-up as I’d expected. It also felt odd that the villain had so little page space.

104. The Four Agreements by Don Miguel Ruiz. Self-help book. Some interesting core ideas but the style and the heavily Christian-influenced spirituality really didn’t work for me. There was also some aspects that felt like victim blaming which put me off.

105. No Place Like Home by Seanan McGuire. Short story from the InCryptid series. Jonathan is relieved to finally make it home safely, but Fran is not sure she fits in. Enjoyable enough, but the trope flip didn’t entirely work for me and the ending felt like a joke I wasn’t quite getting.

106. Stingers and Strangers by Seanan McGuire. Short story from the InCryptid series. Jonathan and Fran investigate the disappearance of a hive of giant, psychic wasps… only to discover they have bigger problems. This story was published in an anthology, rather than self-published on the author’s website and I feel that the difference showed. This was a stronger story than many of the others. The tension was excellent and it was nice to see Jonathan and Fran’s relationship move forward.

107. Record of a Spaceborn Few by Becky Chambers. The third of the Wayfarers series. This is basically a book about a fleet of generation ships who have arrived at their destination and the descendants of those who chose to continue living on board. Told from multiple perspectives, it’s really a story about community. In that sense, it rather reminded me of New York 2140 by Kim Stanley Robinson, albeit with better character work. It was kind, heartbreaking and aware of nuance.

108. Married in Green by Seanan McGuire. Short story from the InCryptid series. The circus comes to visit on the eve of Jonathan and Fran’s wedding. A short and sweet story with some ominous foreshadowing.

109. The Red Magician by Lisa Goldstein. Read for the Lady Vaults book club. A mythopoeic tale of a young Jewish woman who gets caught in a conflict between her village’s rabbi and a mysterious stranger. Set against the background of WWII, it goes to some dark places. The main character seemed a bit passive at times and the characters were often more symbols than people, but I find the latter is often characteristic of mythopoeic work.

110. Whisper by Lynette Noni. Read for the 2018 Aurealis Awards. A young woman is imprisoned in a government facility in an effort to coerce her into using her special abilities.

111. City of Blades by Robert Jackson Bennett. Second in The Divine Cities trilogy. Part mystery, part supernatural fantasy. A retired general gets pulled in for one last job: to investigate the disappearance of a spy who was looking into a potentially divine phenomenon. I’ve been loving this series so much and especially that the first two books have each featured a different woman of colour who is amazing at what she does. General Mulaghesh is delightfully cranky, partially because she has Seen Some Shit. The book has a slow build, but really throws itself into the action once it reaches the tipping point. The worldbuilding continues to enchant me. Highly recommended.

112. Wicked and the Wallflower by Sarah MacLean. First in The Bareknuckle Bastards trilogy. Historical romance. A young noblewoman from a family verging on financial ruin becomes a pawn in a game between a crime boss with a heart of gold and a stone cold nobleman. Fluffy and fun.

113. Palace of Fires by Bill Bennett. Read for the 2018 Aurealis Awards. A young girl inherits her powers and discovers her family broke a pact with the Devil. She must go on the run from the evil forces hunting her.

114. An Artificial Night by Seanan McGuire. Third in the October Daye series. Toby must venture into the realm of the Wild Hunt in order to rescue a group of kidnapped children. Wonderfully atmospheric. I also felt you could see the seeds for McGuire’s more recent Wayward Children series. However, I wasn’t wholly sold on the thread with Toby’s Fetch, May.

115. Mercy Point by Anna Snoekstra. Read for the 2018 Aurealis Awards. Five teenagers who suspect they were adopted come together to discover the secrets their parents have kept hidden.

The Fallen Sun by David R. Grigg
A Curse of Ash and Embers by Jo Spurrier
Cloud Cursed by Becca Lusher