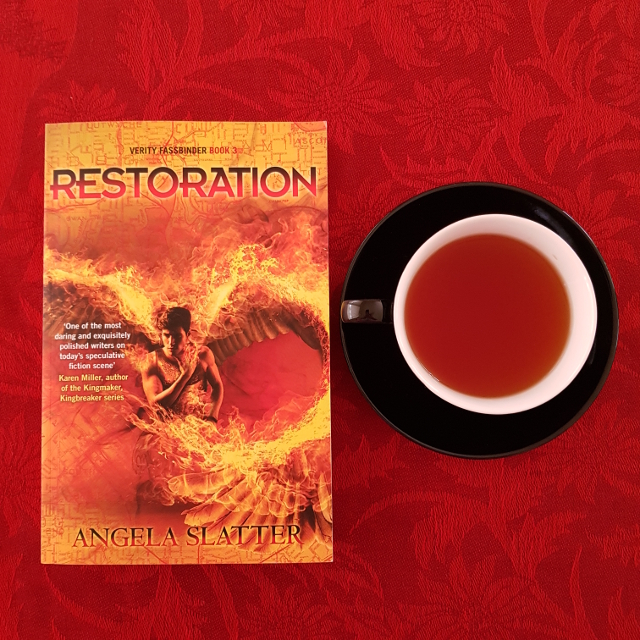 Walking between the worlds has always been dangerous – but this time V’s facing the loss of all she holds dear.

Verity Fassbinder thought no boss could be worse than her perfectionist ex-boyfriend – until she grudgingly agreed to work for a psychotic fallen angel. And dealing with a career change not entirely of her own choosing is doing nothing to improve V’s already fractious temper. The angel is a jealous – and violent– employer, so she’s quit working for the Weyrd Council and sent her family away, for their own safety. Instead of indulging in domestic bliss, she’s got to play BFFs with the angel’s little spy, Joyce the kitsune assassin . . . and Joyce comes with her own murderous problems.

The angel has tasked V with finding two lost treasures, which would be hard enough even without a vengeful Dusana Nadasy on her heels. And Inspector McIntyre won’t stop calling: the bodies of Normal women who disappeared decades before are turning up, apparently subjected to Weyrd magics. Angelic demands or not, this isn’t something she can walk away from.

And the angel is getting impatient for results . . .

The Verity Fassbinder trilogy comes to a successful conclusion with Restoration and remains some of my favourite urban fantasy.

The action picks up about a month after the previous book. Having sent her husband away with their baby girl, Verity is going through a kind of grieving. This book–like the others–is told from Verity’s perspective, so we get the full impact of what that’s like for her, the triggers that bring it all crashing back. Her daughter is still so young and Verity is missing out on watching her reach those development milestones that are one of the gifts of parenthood. Unsurprisingly, then, the series continues to be preoccupied with the relationships between mothers and daughters. This extends beyond Verity to encompass a number of side characters. For instance, my favourite grumpy Inspector Rhonda McIntyre is reluctantly taking the first steps towards children with her lesbian partner. Other characters are dealing with the impending death of their mother or the news that their mother isn’t dead, as they had been previously told.

Another thing I liked is that even though Verity doesn’t get to do much mothering to her own daughter, she nevertheless has a maternal or mentoring relationship with a couple of the younger women around her. It is especially amusing to see her reaction as she comes to realise how she is viewed by these women. Since the book is told in first person, we know what a hot mess Verity is and how far she feels from being a suitable role model. But even though her admirers see first-hand some of that mess, it ends up being part of what they admire about her.

A consequence of this thematic preoccupation is that there are so many female characters! And that means lots of different types of female characters, from elderly housekeepers to militant nuns, from powerful matriarchs to small business owners just trying to find a date.

The style is full of snark and banter, which frequently made me laugh out loud. The pacing is also handled well. Verity might have quit working for the Weyrd Council, but old habits die hard and Verity is an inveterate multitasker. This means there’s quite a few interweaving plot threads and consequently there’s always new developments to keep things moving forward.

One criticism I had of the previous books, and remains a criticism of this book, is the way in which magical healing is handled. While it’s not a matter of clicking one’s fingers and being restored, there is a sense that every injury can be recovered from with sufficient time and magic. I rather felt sorry for Louise, who gets schlepped around Brisbane to heal people. It is especially disappointing because her character is distinctly underdeveloped and she’s treated more as a tool than as a person.

The story did a great job of wrapping up loose ends but has planted a few new seeds. I have got my fingers crossed for more because I’m all about smart, sassy, Australian urban fantasy.