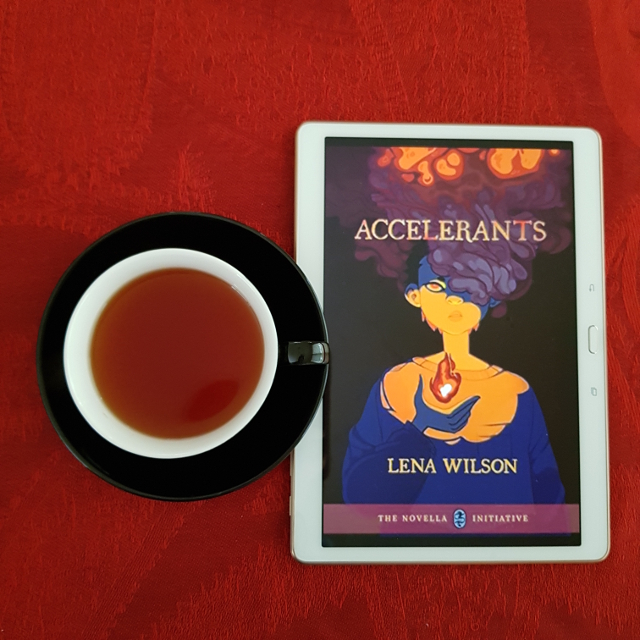 When Lucy is six years old she finds two things that will change her life forever: she is an Omni that can control fire, and her power is deadly. Under the sharp watch of her secretive father, Lucy is confronted with the consequences of the worst mistake of her life every day. On the eve of her eighteenth birthday, things finally seem like they are getting better–with the promise of freedom at college on the horizon, and the dream that Jessa, the girl of Lucy’s dreams, might reciprocate Lucy’s feelings. But in an instant, everything changes.

Incarcerated and stripped of her rights, Lucy’s new world is behind locked gates and antiseptic interrogation rooms. Like other Omnis, Lucy is separated from her family, seen as a criminal for trying to live with other humans, and locked away–possibly forever. But Lucy and her fellow Omnis aren’t going quietly into submission.

Accelerantsis a novella about first love, cold-hearted betrayal, and the implacable truth that sometimes you have to burn it all down.

It’s a hard line to walk between facing the terrible things of the world and the need for hope. Accelerants manages it with style.

The story is told from Lucy’s point of view in first person present tense. This gives it a very immediate feeling, even though the chapters alternate between the relatively normality of Lucy’s past and her present incarceration and torture. Lucy’s relationship with Jessa is allowed to unfold very naturally, bringing some sweetness to an otherwise tense story.

On the surface, it looks like a story about anger. Take that gorgeous cover, for one thing. However, I found it far more driven by fear. The prologue includes a (non-graphic) scene of domestic abuse, so right away there is a sense of urgency as we see Lucy desperate to protect her mother and to hide herself. The scenes of Lucy’s past show her phobia of fire, which is so bad it leads to panic attacks. We see her constant fear of losing control. There’s even her belief that Jessa could never reciprocate her feelings and her low-key fear that she might destroy their friendship. This younger Lucy tends to freeze when she’s in trouble, slow to accept betrayal, despite the clear signs. Even the present Lucy never quite comes across as truly angry. Instead, she makes calculated decisions designed to ensure her survival.

Now, I love my angry girls and feel strongly about depictions of feminine anger. However, I find this kind of story equally important and relished the way it pushes back at the idea of women as weak and emotional creatures. It shows how sometimes it is necessary to fight back. In that sense, it reminded me a lot of Children of Blood and Bone by Tomi Adeyemi.

Another similarity between these two stories is the way they feature PoC casts. However, there are some key differences on that front. The cast of Children of Blood and Bone are entirely black, whereas Accelerants has a bit more variety. Lucy is half Korean. Jessa, her best friend and crush, is African American. Lucy’s friend in prison, Fatima, is Latina. There is even a white person, Lucy’s father, who is positioned as the key source of her suffering. In this way, Accelerants is doing something extra interesting by looking at how the abilities of the Omnis can be used to further marginalise minorities. There are explicit parallels between Lucy’s incarceration for being Omni and the conversion camps for LGBT youths.

Overall, I found Accelerants was a deeply thoughtful novella that dug into some heavy issues while managing to retain a strong thread of sweetness and hope.

2 thoughts on “Accelerants by Lena Wilson”