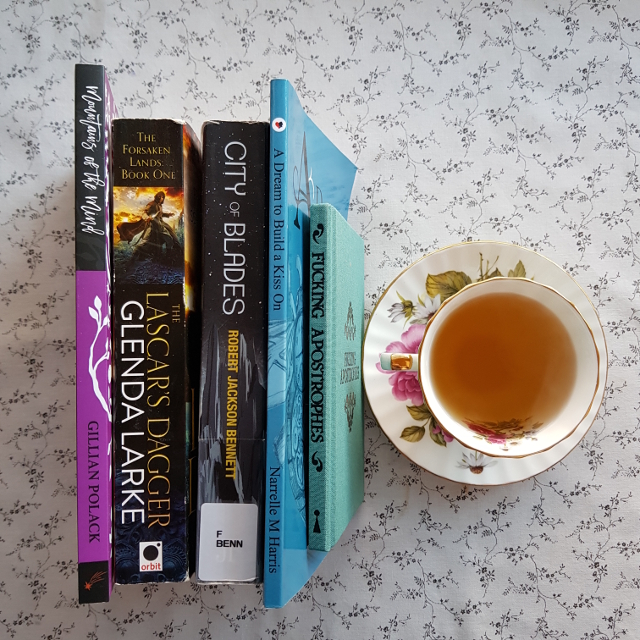 June was a surprisingly good month for my Mt TBR, despite the fact I attended Continuum. A judicious cull and a last-minute binge read meant I actually managed to shrink the pile a little. However, there’s still a way to go if I hope to break even this year.

66. Tricks for Free by Seanan McGuire. Sixth book in the InCryptid series. On the run from the Covenant of Saint George, Antimony Price seeks refuge working in an amusement park. But a rash of disasters makes it hard for Annie to keep her head down, especially once the body count starts to rise. I’m generally a fan of Seanan’s work and this was no exception. I particularly enjoyed the way it dug into what it’s like to be poor and marginalised.

67. Heroine Complex by Sarah Kuhn. Shortlisted for the Hugo Awards. First in the Heroine Complex series. A long-suffering assistant to a superhero is convinced to pose as her boss for one night. This superhero chick-lit was a fun adventure. The romance was handled well, but I wasn’t entirely satisfied by the resolution of key toxic relationships.

68. Born to the Blade, Ep. 1: Arrivals by Michael Underwood. The first part in an eleven-part series from Serial Box. In a world of floating sky islands ruled by magic and duels, a fragile peace is coming to an end. The characters were diverse and seemed interesting but I found the writing style bland and unengaging.

69. A Dream to Build A Kiss On by Narrelle M. Harris. Set in the modern day, Sherlock Holmes and John Watson learn to live with then love each other while they match wits with Professor Moriarty. Told in short vignettes, it was perfect reading for the flight home from Continuum. Sure to appeal to fans of Sherlock fanfic.

70. The Fifth Season by N.K. Jemisin. First in the Broken Earth trilogy. As the world comes to an end once again, a woman pursues her husband to enact vengeance for killing their son. A brutal story that involves an oppressed class of earth benders. I bounced off this the first time I tried to read it, shortly after the murder of Eric Garner. However, I’m glad I came back to it. Its anger and its social commentary are important and I loved the way magic and geology intersect. I was also really impressed with the perspective twists.

71. Black Bolt: Hard Time by Saladin Ahmed and Christian Ward. Shortlisted for the Hugo Award. Black Bolt is falsely imprisoned and must form some unlikely alliances in the hope of escaping. I was extremely underwhelmed by the story. It particularly suffers in comparison to its Hugo rival Bitch Planet, which uses its prison narrative to make some sharp social commentary.

73. Six Wakes by Mur Lafferty. Shortlisted for the Hugo Award. A locked-room murder mystery set on a space ship. I loved the worldbuilding, the combination of genres and the diversity of the cast. However, the ultimate villain was perhaps a bit too heavily foreshadowed.

74. The Martian Obelisk by Linda Nagata. Shortlisted for the Hugo Award. A science fiction short story about an artist commissioned to create a monument on Mars. A quiet, understated story about futile gestures and doing what is right. It kind of crept up on me.

76. Raven Stratagem by Yoon Ha Lee. Shortlisted for the Hugo Award. Second in the Machineries of Empire series. A psychotic general hijacks a fleet to pursue an enemy of the very empire that just tried to kill him (again). A compelling instalment to the series. I really enjoyed the way it was told from perspectives other than Jedao’s and to see more of the servitors. I’m really looking forward to the next book.

77. Fucking Apostrophes by Simon Griffen. A non-fiction book about the appropriate use of apostrophes. Wonderfully short and to the point, but the swearing was an unnecessary affectation that became tiresome quickly.

78. The Alchemy of Fine by Tansy Rayner Roberts. A prequel novelette to the Belladonna University series, it probably won’t make a whole lot of sense to those who haven’t read the series. Moving backward in time, it tells the story of how Hebe and Sage started dating and then broke up, as well as how the band Fake Geek Girl formed. A delightful read, but one that doesn’t really bring anything new to the series.

Worth Her Weight in Gold by Sarah Gailey. Set in the River of Teeth‘s alternate history world. Houndstooth finds his getaway difficult when Ruby, his hippo, decides she’s not moving any further. A fun story that stands fine on its own.

Infinite Coffee and Protection Detail by owlet. This series is close to 260K of Steve Rogers/Bucky Barnes fanfic. After the events of Captain America: The Winter Soldier, Bucky is no longer James Buchanan Barnes nor even just the Winter Soldier but some combination of both. As he attempts to reconcile his shattered psyche, he must also deal with a compulsion to protect Steve Rogers. While this is technically slash, there’s no sexual content until the final story. Instead, it’s a series of delightful stories about looking after one’s mental health and making friends.