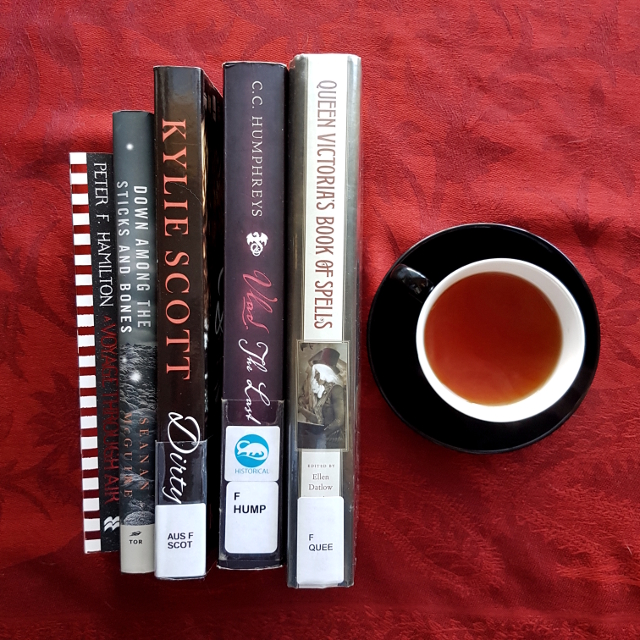 Although August got off to a good start, I had a bit of a reading slump that started about a week in. I’m only just pulling out of it now. Nevertheless, Mt TBR is still looking in good shape after I culled a few books. It brings me back below my starting figure for the year, which I’m very pleased by. Now it’s just a matter of seeing if I can maintain that until the end of the year–keeping in mind that Conflux, my birthday and Christmas all lie ahead.

119. Off Campus by Amy Jo Cousins. First in the Bend or Break series. A contemporary m/m romance. A disgraced millionaire’s son is given a dorm room with a gay roommate who’s determined to get rid of him by having a series of loud one-night stands. However, it doesn’t quite go to plan. The book deals thoughtfully with issues of mental health–in particular agoraphobia and anxiety–as well as the process of coming out. I particularly loved the friendships and the way they buck against stereotypes.

120. The Secret Throne by Peter F. Hamilton. First in the Queen of Dreams series. A middle grade book about two sisters who discover they’re princesses of another realm when their father is kidnapped by evil forces.

122.The Starlit Wood edited by Dominik Parisien and Navah Wolfe. An anthology of fairytales that have been twisted and retold. There were some wonderfully original takes on fairytales–both commonly-known and more obscure–but I didn’t enjoy the anthology as much as I expected to. This is mostly a matter of taste: I’m not super keen on absurdism or drug use.

124. Grace and the Fever by Zan Romanoff. A contemporary New Adult book. Grace has been a fan of the band Fever Dream for years. Then, one night, she accidentally meets one of the band members and gets sucked into their orbit. An interesting meditation on fandom, celebrity and the intersection between the two. Thanks to the Demographically-Similar Jennys at Reading the End for this recommendation.

125. Down Among the Sticks and Bones by Seanan McGuire. Wayward Children #2. This book tells the story of Jack and Jill from Every Heart A Doorway, going back into their past to show how they arrived in their portal realm and what happened to them while they were there. A tightly-written and evocative story that pokes at the performance of gender that society–and parents, in particular–force on children.

128. Control by Cardeno C. and Mary Calmes. A contemporary fantasy m/m romance. A hawk shifter who is the ruler of his flock falls in love with a nomadic bear shifter who has been raised by humans. The characters were utterly adorable and I found the world intriguing. I’ll definitely be digging around to see if I can find any more.

129. A Voyage Through Air by Peter F. Hamilton. The third in the Queen of Dreams series. Review forthcoming.

A Courtship of Dragons by Becca Lusher
All the Lonely People by E.C. Myers
The Watchmaker’s Daughter by C.J. Archer
The Modern Woman’s Guide to Finding a Knight by Anna Klein

Bright Hair by Leife Shallcross. A twisted take on the Rapunzel fairytale. Short and snappy.

New Tricks by opalish. A short retelling of Yuri On Ice!!! from the perspective of the Russian coach, Yakov. I loved the wry voice.