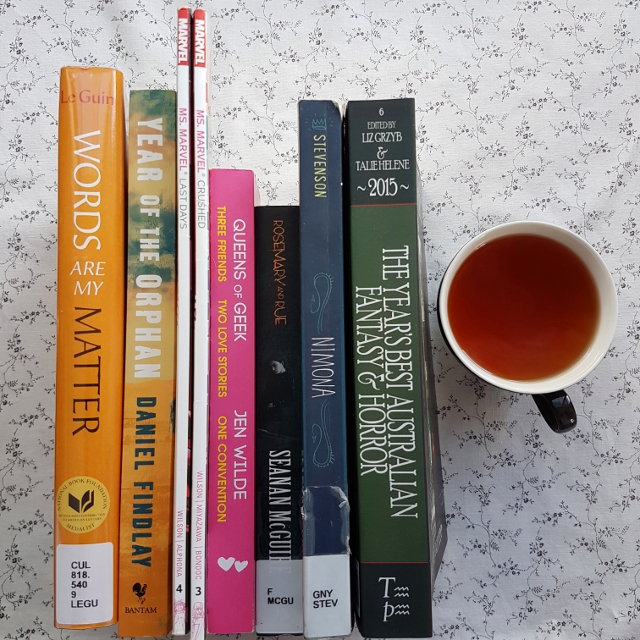 It’s official: the Hugo Awards have broken my Mt TBR. The voting packet arrived this month and I am suddenly drowning in books. There’s still some that came in the voting packet that I haven’t yet recorded on my TBR. Nevertheless, I’m quite delighted. In addition to the things listed below, I also made my way through the material provided for the Best Fan Writer and Best Short Story categories. Since they’re not exactly books, it’s hard to know how to capture them in my records.

83. The Geek Feminist Revolution by Kameron Hurley. Read for the Hugo Awards. Some interesting bits and pieces but a bit repetitive and nothing terribly ground-breaking.

86. Children of the Different by S.C. Flynn. Reviewed here

87. Etched in Bone by Anne Bishop. Fifth book in The Others series. A fantasy novel set on an alternate Earth where humans live at the tolerance of the Others–shapeshifters and Elementals–who control the land. An enjoyable read, but seemed like a bit of an anti-climax after the last book and the material is becoming a bit thin.

91. Ms Marvel, Vol. 4 by G. Willow Wilson. Kamala gets to properly meet her hero Captain Marvel and it is utterly adorable. I enjoyed Kamala’s fannishness.

92. Ms Marvel, Vol. 5 by G. Willow Wilson. Read for the Hugo Awards. Juggling life as a superhero along with school, friends and family can get a little overwhelming sometimes. A sweet, and I enjoyed seeing Kamala make a new friend. But I didn’t enjoy this one quite as much as the last one.

93. Spindrift by Amy Rae Durreson. M/M romance. After a suicide attempt, Sion retreats to the seaside to recover and paint. Instead, he finds himself falling for Mattie–a charming young man almost ten years his junior–and haunted by one of Mattie’s relatives. The book utilises a few light horror elements to good effect and the couple are utterly charming. I just want to give Sion a giant hug.

94. Beyond Possession by Kit Rocha. Post-apocalyptic erotica. A short novella set between the fifth and sixth books of the Beyond series. Zan’s last mistake almost cost the life of a fellow O’Kane. When he’s asked to watch over Tatiana Stone, he’s determined not to let history repeat itself. Tatiana’s exhaustion at trying to walk some fine lines was very relatable. The series also maintains its excellent bisexual representation and sex positivity.

And All the Roads are Blinding by moemachina. An adorable 10 Things I Hate About You fic wherein Kat Stratford and Patrick Verona become friends again via Facebook years after they broke up. Highly recommended to anyone who loves the movie.