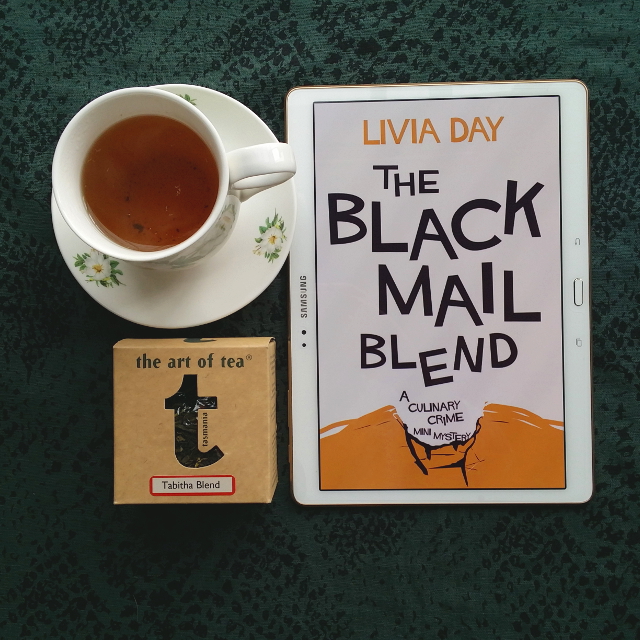 This shouldn’t be a recipe for mayhem and murder, but Tabitha Darling has been burned once before and she knows the signs that she’s about to fall into another crime scene. At least she doesn’t have to worry about love triangles any more. Right? RIGHT?

Saying I like a good cup of tea is rather like saying the sun rises in the east. So there was no way I was going to be able to resist a crime novella that comes with its own blend of tea–especially not when the crime novella in question belongs to Livia Day’s Cafe La Femme series.

Sandwiched between A Trifle Dead and Drowned Vanilla, The Blackmail Blend gives a taste of all the important elements of the series. After being somewhat scarred by the events of A Trifle Dead, Tabitha is doing her best to steer clear of crime and murders. However, when someone poisons the Regency romance author who hired Tabitha to cater for her book launch, Tabitha finds herself smack in the middle of the action once again. Already there’s crime and food. Add to that Tabitha’s complicated love life: the very hot Scotsman she turned down in the previous book makes a reappearance investigating something shady going on in the romance community, while Tabitha’s taciturn policeman beau is keeping his hands strictly off her and any crime in which she ends up being involved.

The problem with finger food is that it generally leaves you hungry. There wasn’t quite enough here to satisfy me, particularly in relation to the crime elements. However, I’m aware that this is a problem I tend to have with most serial novellas. The Blackmail Blend still managed to be a lot of fun and had me laughing out loud. The issue with a Regency high tea particularly entertained me… and had me thinking I’m reading the wrong (or the right) Regency romances.

The story could make a good introduction to the series, but readers who are aware of the established relationships will get the most out of it.

As I mentioned, The Blackmail Blend comes with its own tea. Produced bya Tasmanian company called The Art of Tea, it’s a blend of green and black teas with chrysanthemum, mango & peach. The mixture of teas makes it light and suitable for the afternoon. It has a delightfully floral fragrance (that I mistook for rose, at first) but only a mild flavour.