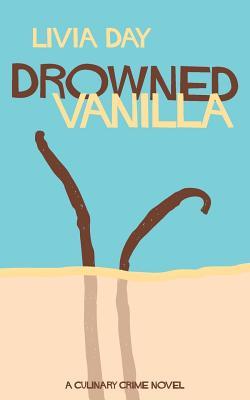 Disclaimer: I was provided with a free copy of this book in exchange for an honest review. This review may contain spoilers for previous books.

It’s the beginning of a hot, hot summer in Hobart. Tabitha Darling is in love with the wrong man, and determined to perfect the art of ice cream. Playing amateur detective again is definitely not on the cards–not even when her friends try to lure her into an arty film noir project in the historical town of Flynn.

But when a young woman goes missing from a house full of live webcams, and is found drowned in the lake outside Flynn, Tabitha is dragged into the whole mess: film crew, murder victim, love life and all.

There were two girls using the internet pseudonym French Vanilla, and only one is dead. So where is the other one? Why is everyone suddenly behaving like they’re in a (quite specific) Raymond Chandler novel? And how the hell did the best kiss of Tabitha’s life end up on YouTube?

Even ice cream isn’t going to get them out of this one.

I love to read speculative fiction but every now and then it is good to take a break and read something else. Usually, it’s romance, but occasionally I like to dip into some crime. In Drowned Vanilla I get the best of all three: a crime novel with a strong romantic plot written by a spec-fic author in another guise. Having devoured A Trifle Dead during Dewey’s read-a-thon, I was delighted when I was offered a review copy of Drowned Vanilla.

Time has passed since A Trifle Dead. Tabitha’s roommate Ceege has been dumped by his girlfriend, one of Tabitha’s love interests has left town, and she is struggling to get used to having days off now that Xanthippe has taken over as co-owner of Cafe La Femme. I liked this sense of life having moved on, despite traumatic events. Things have changed, and so has Tabitha.

The writing style has also changed slightly. Each chapter now begins with a snippet of writing from the perspective of a particular character, most often Tabitha. These snippets include things like a list of ice cream flavours Tabitha wants to create, some of her recipes (including commentary), or email exchanges on potential menu items with Cafe La Femme’s chef. It was an excellent way of illustrating the characters’ preoccupations and reinforcing that sense of daily life continuing inevitably onward.

Tabitha is the glue that keeps the story together, but she’s not always a likeable character. She comes across as surprisingly judgemental in this book, though that gets folded into the plot rather nicely. There are also times when she comes across as shallow; her preoccupations with food, vintage clothing and her complicated love-life arise at some rather inappropriate moments. However, her flaws make her easy to relate to and it’s clear that her heart is in the right place. She may be shallow, but she also cares for the people around her–not just her friends but also the strangers she encounters.

To return to Tabitha’s complicated love-life, new readers should be aware that the series features a love triangle. I’m not usually a fan, but I feel it is handled well. Both love interests are shown in a positive light and given equal weight. I found this made it genuinely difficult to pick a “team” and thus helped me to empathise with Tabitha’s dilemma. I also very much appreciated that neither of them tried to change who Tabitha was. They may not be happy with the situation, but they handle it with maturity instead of resentment.

While Drowned Vanilla may seem as fluffy as one of Tabitha’s desserts, it only serves to disguise the serious issues underneath. In particular it delves into the way the internet and social media is increasingly blurring the line between public and private lives. It also examines the difficulties faced by those living in rural areas.

Speaking of rural areas, the series is set in Tasmania. I really loved this. The way Hobart is depicted as an oversized small town where there are very few degrees of separation between everyone felt very authentic and reminded me of my own hometown of Canberra.

The story was an excellent continuation of the series and one I very much enjoyed. If you like your murder mysteries short and sweet but with a rich flavour, Drowned Vanilla is for you.