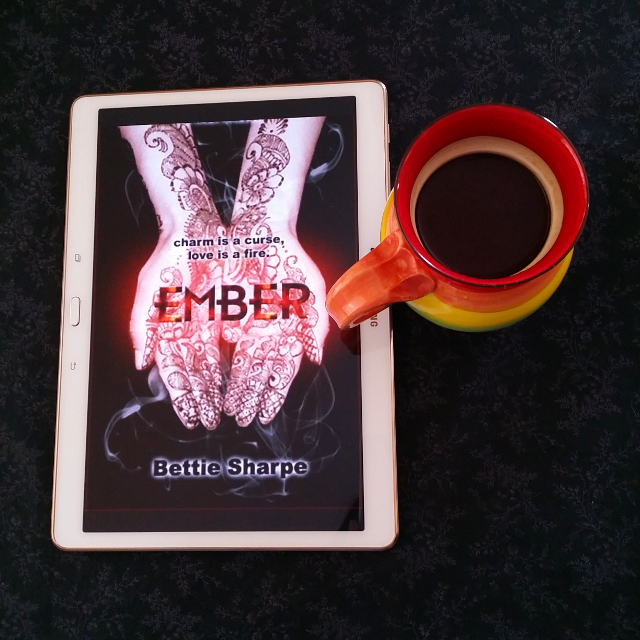 Everyone loves Prince Charming. They have to–he’s cursed. Every man must respect him. Every woman must desire him. One look, and all is lost.

Ember would rather carve out a piece of her soul than be enslaved by passions not her own. She turns to the dark arts to save her heart and becomes the one woman in the kingdom able to resist the Prince’s Charm.

Poor girl. If Ember had spent less time studying magic and more time studying human nature, she might have guessed that a man who gets everything and everyone he wants will come to want the one woman he cannot have.

Ember is a twisted retelling of Cinderella. Almost all of the elements of the tale have been subverted in some way. Ember is not a meek, downtrodden girl but a prickly and powerful sorceress with an affinity to fire. She eschews the silks and satins of nobility because she feels more comfortable in wool and cotton, not because she’s deprived. Her step-family don’t abuse her and the prince takes on the role of villain. Throughout the story there are mentions of other fairytales (such as Snow White), each equally as twisted. And I loved every bit of it.

I particularly enjoyed the dynamic between Ember and her step-family. Although the relationship starts out as a mercenary one, genuine affection grows between them. They are practical, sexually liberated women who respect and support each other in the face of a world that hasn’t always been kind to them.

Memory of In the Forest of Stories recommended this delightful novella to me some time ago. It languished on Mt TBR for just enough time for me to forget what it was about (which, I’m bemused to say, wasn’t that long). So I was surprised to find this fairytale was much raunchier than I was expecting. There are explicit sex scenes that contain quite a bit of heat, while not overwhelming the plot. Readers should be aware that there are some issues around dubious consent.

If you like your fairytales hot and twisted, Ember is well worth checking out.

4 thoughts on “Ember by Bettie Sharpe”