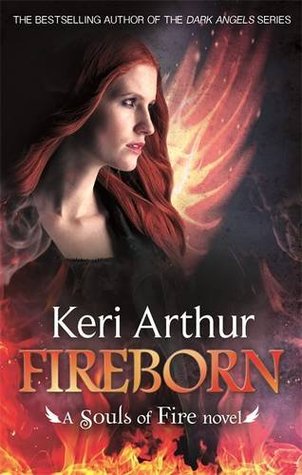 Emberly has spent a good number of her many lives trying to save humans. So when her prophetic dreams reveal the death of Sam, a man she once loved, she does everything in her power to prevent it from happening. But in saving his life, she gets more than she bargained for.

Sam is working undercover for the Paranormal Investigations Team, and those who are trying to murder him are actually humans infected by a plaguelike virus, the Crimson Death: a by-product of a failed government experiment intended to identify the enzymes that make vampires immortal. Now all those infected must be eliminated.

But when Emberly’s boss is murdered and his irreplaceable research stolen, she needs to find the guilty party before she goes down in flames….

Keri Arthur is a Guest of Honour at Contact2016, which is wrapping up today. I thought I’d use the opportunity to check out her work for the first time. Fireborn has me regretting I didn’t do it a lot sooner.

The story manages to stay firmly within the boundaries of urban fantasy while offering some interesting twists on the genre. It was very cool to see it set in Melbourne, though I don’t know the city well enough to know whether the story did it justice. This choice of setting made for a great range of locations, allowing for both shady industrial areas and shady forest without having to go too far afield.

Fireborn also offers some interesting choices in terms of the supernatural elements it draws on. Yes, there are vampires and werewolves, but they take a back seat to phoenixes and elemental fae.

Emberley is what really made the book for me. Being a phoenix, she is capable of assuming three forms–human, firebird and pure flame. This makes her pretty powerful, but she’s not invulnerable. If she uses up too much of her power, she needs to renew it. Fire is her first and most instinctive weapon, and I liked the way this was shown. However, flame is not always the most effective weapon. Emberley is also forced to improvise from time to time, making for some of the most interesting parts of the story. She’s smart, but she makes mistakes.

Speaking of smart, one thing Emberley’s not is a smartass. She certainly makes some quips from time to time, but it’s never overdone and doesn’t slide over the line into irritating. With one exception. The line “trust me” is definitely overused.

Of course, my favourite thing about Emberley is her predilection for green tea. A nice change, since urban fantasy is so obsessed with coffee.

Another thing I really liked about Fireborn was how the plethora of love interests was handled. There’s a love triangle of sorts, but it’s an unconventional one and the book largely takes a mature, polyamourous approach. Phoenixes have a lives-long mate with whom they raise children. Rory lives with Emberley, works as a firefighter (what else would a phoenix do?) and is utterly adorable. He knows Emberley can handle herself and is content to take a back seat unless asked to step forward.

However, a curse placed on phoenixes means they can never fall in romantic love with their mate and must instead suffer through one doomed love each lifetime. This doesn’t detract from the genuine love and affection between Rory and Emberley. It does mean that Emberley never really got over Sam when he discovered Rory and broke it off a few years back. Being human, he never quite understood. Sam comes across as rather unlikeable. There are obvious, though unstated, reasons for that, but he doesn’t do himself any favours with the way he treats Emberley. He and Emberley clearly still have feelings for each other, but Emberley is convinced he doesn’t want any part of a relationship and he does nothing to dissuade her.

Much more appealing is the mysterious fire fae Jackson, who gives a new meaning to hot. The tension between him and Emberley sizzles, providing quite a contrast to Sam’s coldness. Each of these men play a very different part in Emberley’s life and it was nice to see that they complement each other rather than competing with each other. Most of the time, anyway.

All in all, Fireborn brought some creative twists to urban fantasy and was a fantastic read.

2 thoughts on “Fireborn by Keri Arthur”