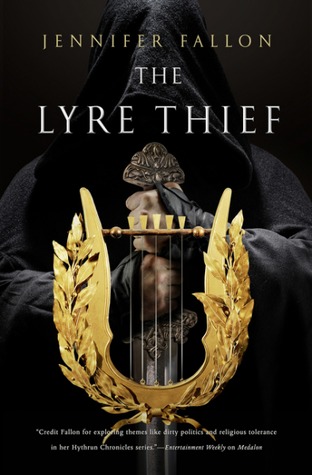 Her Serene Highness, Rakaia, Princess of Fardohnya, is off to Hythria, where her eldest sister is now the High Princess, to find herself a husband, and escape the inevitable bloodbath in the harem when her brother takes the throne.

Rakaia is not interested in marrying anyone, least of all some brute of a Hythrun Warlord she’s never met, but she has a plan to save herself from that, too. If she can just convince her baseborn sister, Charisee, to play along, she might actually get away with it.

But there is trouble brewing across the continent. High Prince of Hythria, Damin Wolfblade, must head north to save the peace negotiated a decade ago between the Harshini, Hythria, Fardohnya, Medalon and Karien. He must leave behind an even more dangerous conflict brewing between his wife and his powerful mother, Princess Marla.

…And in far off Medalon, someone has stolen the music.

Their quest for the tiny stolen lyre containing the essence of the God of Music will eventually touch all their lives, threaten everything they hold dear and prove to be far more personal than any of them can imagine.

I have a confession to make: I’ve never read any of Jennifer Fallon’s novels. She’s one of those seminal Australian fantasy writers I’ve always heard amazing things about but never quite managed to get to. I even have one of her books gathering dust on Mt TBR… which I’ll be dusting off soon.

The Lyre Thief is perhaps not the best place to start with Fallon’s work. While it is the beginning of a new series, I didn’t realise it was part of a pre-existing world with an overarching story. It is possible to jump in here, but as a new reader I found it required me to work hard. Being epic fantasy, there’s a complex web of relationships in place–one that spans multiple kingdoms. The events inThe Lyre Thief deal with the consequences of previous books and is set about ten years after the last series ends. Fallon does an excellent job of conveying these previous events without seeming to info-dump and it gives an excellent sense of a lived-in world. Nevertheless, it is a lot for a new reader to take in.

I thought it was worth the effort. Being an epic fantasy, the story is told from multiple points of view. Each POV character has their own thread that interweaves with the others to create a bigger picture that spans the nations involved in this world. In some books this can feel choppy, but Fallon manages it with skill. She kept me interested in each of the characters’ stories while simultaneously creating a nice flow to the overall story. In fact, she uses alternating POVs to subtly convey an issue with time that crops up in one of the threads.

Of course, it’s the characters that really make the story. This is not one of those gloomy epic fantasies where the characters are all horrible people being horrible to each other for the sake of being “gritty” or “realistic”. For the most part, I rather liked the characters (with a couple of exceptions) which made it easy to be interested in what was happening to them. This meant that I wasn’t waiting impatiently for it to get back to a certain character, even though I still had a couple of favourites. However, this does not mean the characters were without their flaws. Almost without exception, they are looking out for their own interests and act selfishly. In most cases, it is balanced out by genuine love and affection for at least one other person.

While I wouldn’t classify the story as grimdark, readers should be aware that there is a rape scene and approach with caution where necessary.

As I mentioned, The Lyre Thief is the first in a new series, so there’s plenty yet to be resolved. Each of the threads is left at a point of transition, giving just enough resolution to be satisfying while still leaving the reader eager for more.

Overall, I really enjoyed The Lyre Thief, even though it made me work hard. I’ll be making use of the wait for the next book (which, I’m pleased to see, is tentatively scheduled for later in the year) to go back and read the other books set in this world.

4 thoughts on “The Lyre Thief by Jennifer Fallon”