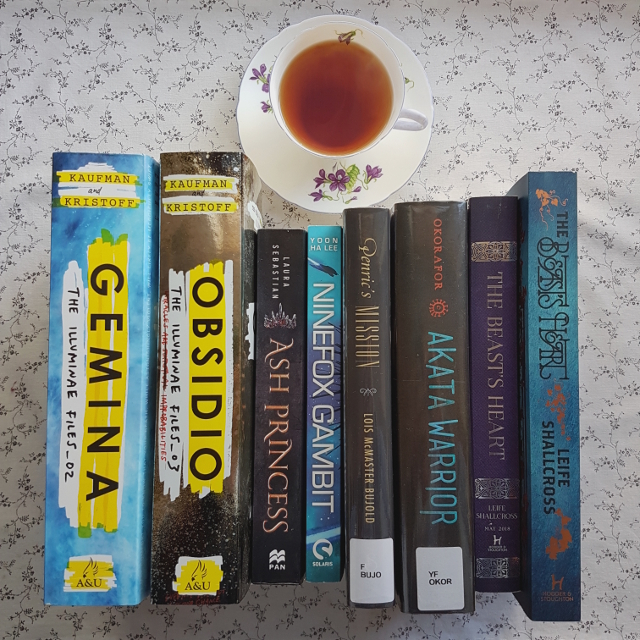 Um, so I did a lot of reading this month. In fact, I don’t think I’ve read this much since I last judged the Aurealis Awards. I might have been a bit excited about the Hugo Awards. Or doing some heavy-duty procrastination. Or maybe both.

I gave myself a free pass on acquisitions this month, partly because I’d been anticipating the release of the voting packet for the Hugos. Which hasn’t come out yet. I managed to pick up a lot of shortlisted stuff from my library anyway. And I probably went a little overboard on the non-Hugo-related stuff, picking up another Book Bundle–this time Lavie Tidhar’s bundle of World SF.

34. Murder on the Titania and Other Steam-powered Stories by Alex Acks. Reviewed here.

35. Gemina by Amie Kaufman and Jay Kristoff. Second in The Illuminae Files. Reread in preparation for Obsidio.

36. Obsidio by Amie Kaufman and Jay Kristoff. Last in The Illuminae Files. With their only way out of the system destroyed, Kady, Ezra, Hanna and Nik return to Kerenza where Kady’s cousin Asha fights with the resistance. A bit of a different beast to the two previous books. The horror elements are toned down (or at least manifest in a different way) and the new couple get much less airtime in order to make space for the adventures of those we’ve already been introduced to. Still, a page-turning read and a satisfying conclusion to the series.

37. The Black Tides of Heaven by JY Yang. Shortlisted for the Hugos. First book in the Tensorate series. Akeha and their twin Mokoya are the gifted children of the Protector. Together they must find a way to survive their mother’s harsh rule. The worldbuilding was fascinating, with a number of interesting elements–including the culture’s treatment of gender. However, I was left with the feeling of gaps in the narrative and wonder whether this novella and its companion The Red Threads of Fortune might have worked better as a novel.

38. Ninefox Gambit by Yoon Ha Lee. First book in The Machineries of Empire. Read as part of the Hugos, since the sequel is shortlisted for Best Novel. A disgraced captain must ally with a brilliant but mad undead tactician in order to recapture a fortress and redeem herself. A fascinating world and I loved the intrigue, but I found it a bit vague in places and it was a bit slow to give the information needed to put the pieces together.

39. The Red Threads of Fortune by JY Yang. Second book in the Tensorate series. Well, this wasn’t at all what I was expecting–which was the telling of Mokoya’s story in parallel with what was happening in The Black Tides of Heaven. Instead, it proved to be a proper sequel, following on from events in the first book. There’s no skipping around in time, either, which made me like it rather better.

40. Bitch Planet, Volume 1 written by Kelly Sue DeConnick. Read as part of the Hugos, since the next volume was shortlisted for Best Graphic Story. A graphic novel about a planet where “difficult” and “non-compliant” women are sentenced to serve prison time. A potential way out presents itself when the prison owner agrees to form a sports team in the hopes of boosting ratings for the ruling council. It’s a violent and angry story, which suits the themes. It also firmly centres women of colour.

41. The Collapsing Empire by John Scalzi. Shortlisted for the Hugos. A space opera in which humanity has come to rely on a natural phenomenon called the Flow to travel between planets. When the Flow begins to fail, some seek to capitalise on the disaster while others are focused on saving humanity. I really enjoyed the cast of characters. There was also some interesting parallels between the collapse of the Flow and current issues of global warming, making some of the reactions in the novel all too plausible.

42. All Systems Red by Martha Wells. Shortlisted for the Hugos. First in The Murderbot Diaries. A security android who has hacked its programming to enable free will just wants to be left alone so it can watch its beloved soap operas. However, someone is trying to kill the people renting it and it is reluctantly coming to like its charges. This was a delight to read. The awkwardness of Murderbot and its desire just to be left alone was very relateable. There was a nice balance between the action sequences and the social aspects.

43. Debts by Amanda Pillar. A short paranormal romance set in the Graced universe. A vampire child is scarred when his mother kills his human best friend. An interesting premise, but way too short to do it justice.

44. Uncanny Magazine, Issue 15 edited by Lynne & Michael Thomas. Mostly read because it contained the only Hugo-nominated novella not from Tor (and it has been on my TBR pile for too long). The issue was a good mix of stories and I particularly enjoyed the non-fiction essay about teaching fanfic. The novella I was interested in (And Then There Were (N-One) by Sarah Pinkser) was a lot of fun, about a world in which a version of the author discovers a way to bridge alternate timelines and uses it to host a convention for the different versions of herself.

45. Reptiles and Frogs of the Australian Capital Territory by Ross Bennett. An informative field guide from which I learned a lot. However, I felt there could have been a better selection of photos.

47. Bitch Planet, Volume 2 written by Kelly Sue De Connick. Shortlisted for the Hugos. After the death of one of their members, plans are falling apart for the ladies of Bitch Planet. I enjoyed seeing a few trans characters be introduced.

48. In Other Lands by Sarah Rees Brennan. Shortlisted for the Hugos. Elliot is a snarky, bisexual teen who is abducted to a training camp for defending the wall between our world and the magic Borderlands. Once there he meets Serene–elf and queen of his heart–and Luke, his rival for her affection. It satirises some of the tropes of high fantasy–both sexist and otherwise–while telling a gorgeous story of friendship and romance. I loved it to pieces.

49. River of Teeth by Sarah Gailey. Shortlisted for the Hugos. A novella set in an alternate history Louisiana. Feral hippos plague the Harriet river. Englishman Windslow Houndstooth assembles a posse to rid the government of this problem once and for all. It featured a cast of diverse and interesting characters and I enjoyed the Western vibe. However, I feel it had a few issues with pacing towards the end.

50. Crash Override: How Gamergate (Nearly) Destroyed My Life, and How We Can Win The Fight Against Online Hate by Zoe Quinn. Shortlisted for the Hugos. A fascinating piece of non-fiction. Quinn details the harassment she received from the movement that would become Gamergate. She does a great job of looking at the factors that made her an attractive target and touches on the wider cultural impact Gamergate has had, as well as delving into her own personal experiences. She also includes some education on information security and ways of combating online harassment.

52. City of Stairs by Robert Jackson Bennett. Shortlisted for the Hugos. A foreign spy with an infamous past comes to an occupied city to investigate the death of an academic friend. An Eastern European-inspired fantasy with a complex political landscape, an interesting magic system and a protagonist who drinks as much tea as I do. Thoughtfully written and engaging.

53. My Favourite Thing is Monsters, Vol. 1 by Emil Ferris. Shortlisted for the Hugos. Set in Chicago in the 60s, this is a graphic novel about a young, mixed race girl who loves pulpy horror and who sets out to investigate the death of her neighbour. This is quite a dark tale, full of domestic horror and also touching on the plight of the Jews in Nazi Germany. The artwork is amazing. The book is so enormous I didn’t realise it was only the first volume and was outraged when none of the threads had wrapped up by the end.

You Don’t Want to Be Published by Peter M. Ball
Ash Princess by Laura Sebastian