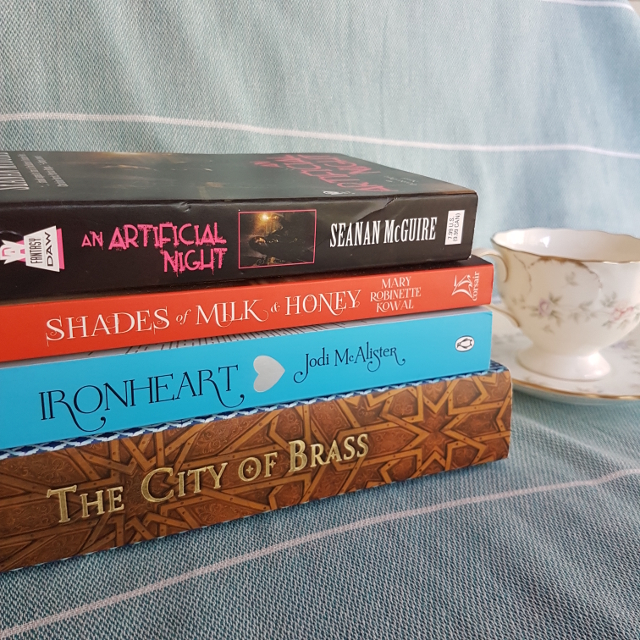 2018 got off to a slow start for me, reading-wise. We were a week into the year before I managed to finish my first book. I put some of it down to the fact I ended up reading some longer books this month, averaging 338 pages per book instead of the 240 of last year.

Yet, despite the slow start, I still managed to read an average number of books for the month. And, better still, I broke even with my acquisitions, as was my goal for the year. Hopefully, I can continue the trend.

At the end of every year, I do an audit on my Mt TBR, adding stuff I’ve missed along the way and getting rid of stuff I’m no longer interested in. This year, inspired by Samantha’s Konmari video at Thoughts on Tomes, I did a bit of a cull and got rid of 16 books. This means that Mt TBR is starting at 351 books instead of 367. I probably wasn’t as ruthless as I could have been, but I’m hoping to keep the ground I’ve gained.

1. The Undercurrent by Paula Weston. Picked up on recommendation from Shaheen of Speculating on Spec Fic. It’s a YA sci-fi thriller about a young woman with the ability to generate electricity. She forms a connection with one of the soldiers who has been hired to protect her and he ends up taking her back to the farm where he grew up. I enjoyed their relationship and the Australian-ness of the setting. There were some interesting themes around climate change, genetic modification and activism.

3. The City of Brass by S.A. Chakraborty. Reviewed here.

5. The $100 Startup by Chris Guillebeau. Some basic and interesting advice on starting microbusinesses. Also a lot of hype and anecdote.

7. Dungeon World Guide by Eon Fontes-May, Sean M. Dunstan and Alex Leal. A quick guide to playing Dungeon World. It’s mostly aimed at people who are having trouble switching to the Powered by the Apocalypse system, but I found a few useful pieces of advice.

8. Dungeon World by Sage LaTorra and Adam Koebel. Reread. Refreshing my memory before running a game. Still a great introduction for new roleplayers or for people who want to focus on the story rather than the rules and numbers.

10. Nexus by Scott Westerfeld, Margo Lanagan and Deborah Biancotti. The conclusion to the Zeroes trilogy, a sci-fi YA about teens with superpowers. I definitely recommend rereading the previous two if it has been a while because there are a lot of names to keep track of. The style was generally good, but the plot felt weak in a few areas.

11. Betrayed by Amanda Pillar. A fantasy romance novelette set in the Graced world. A werebear is rescued from her kidnappers by a weretiger, who helps her take revenge. A bit too short to really work for me.

Jay and Maria by Courtney Milan. Deleted scenes from Hold Me.