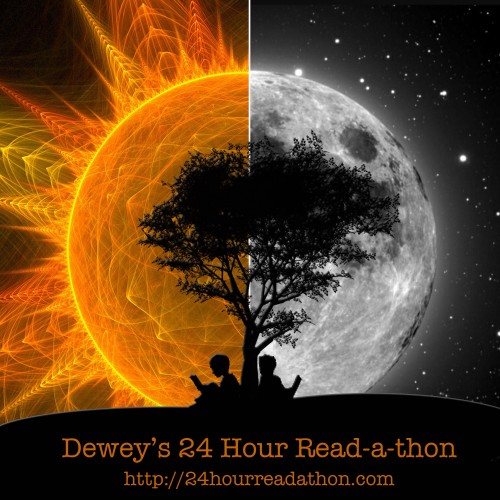 The event kicked off on Saturday at 11PM, local time. I was already asleep by then and didn’t start my read-a-thon in earnest until 7AM on Sunday. My goal was modest: to finish off Three Dark Crowns by Kendare Blake (which needed to be returned to the library) plus one other book. I was already 141 pages into Three Dark Crowns, and managed to have the rest finished by around 9:30AM, at which point I stopped for some toast and tea. The book was an easy read and I managed to get through 100 pages an hour for the first two hours I was reading.

Fatigue slowed me down a bit after that. My next book was Lead by Kylie Scott. It’s the third in her Stage Dive series and was another reasonably light read. I’d finished that by 2PM, with a break in the middle for lunch and to watch a bit of the anime movie Summer Wars.

Since I’d managed to meet my goal already, I dithered a bit over my next book, before finally settling on A Local Habitation by Seanan McGuire. There was a murder mystery element that kept me interested and paying attention. Plus, I always enjoy Seanan’s work.

Mid-afternoon involved a bit of a change of pace, as I was the read-a-thon co-host from 4-6PM. This involved taking over the official website and Twitter account so that Andi, the organiser, could get some sleep. It was my second time co-hosting and I found it just as frenetic as the first time. The read-a-thon had over 1500 participants this round and the Twitter community is very active. It’s also very friendly and supportive, so I had a lovely time. But I was a bit exhausted by the end and feeling the return of my eyestrain a bit.

A break for dinner helped. My sweetheart cooked and we watched a bit more of Summer Wars together. It let me regather for a final few hours. I didn’t quite manage to make it through the rest of A Local Habitation, but I did make it through the first two-thirds. By the time I wrapped up at around 10PM (acutely aware that I had work the next morning), I’d made it through 850 pages. I’m pretty happy with that.

Once again, a big thank you to Andi at Estella’s Revenge for the tireless effort she puts into organising the read-a-thon. She did it on her own this time, which makes it even more impressive.

The next read-a-thon will be taking place on 28-29 April 2018. Don’t forget to mark it on your calendar. It has a great sense of community that keeps me coming back. I do hope you’ll join us next April.