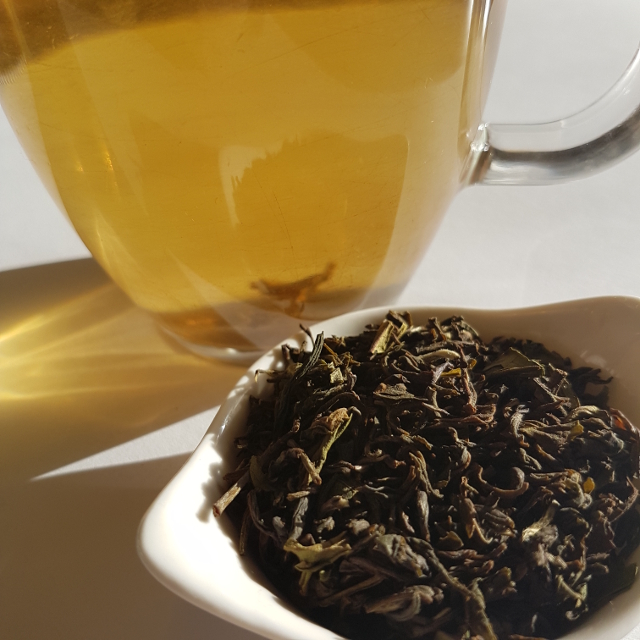 Loose-leaf Links is a feature where I gather together the interesting bits and pieces on sci-fi, fantasy and romance I’ve come across and share them with you over tea. Today’s tea is a Earl Grey Darjeeling from Lupicia. It’s some of the best quality tea I’ve had in a while and the bergamot perfume is just divine. Ju of Transcendancingintroduced me to the shop while I was visiting for Continuum.

Today’s Loose-leaf Links post is a little later than usual due to my attendance at (and recovery from) Conflux. That means I have a lot of links today! So, be sure to grab a cup of tea before you get started.

Rose Christos’ memoir about her notorious Harry Potter fanfic My Immortal has been cancelled. She claims it was because she took steps to protect the identity of her family.

Victoria Schwab’s Shades of Magic series is back in print in Russia. The initial publisher had excised the central gay romance storyline without permission. A new publisher has taken it on unedited… but will be marketing it as adult.

Intisar Khanani’s Thorn, a retelling of the Goose Girl fairytale, has been acquired by Harper Teen. I loved this book and am even more delighted to discover the book deal includes a companion novel.

The winners of the 2017 British Fantasy Awards were announced at the beginning of the month.

The Norma K. Hemming Award (Australia’s equivalent of the Tiptree) has undergone a significant restructure. It is shifting to a 2-year cycle and will be opening to short fiction, novellas, graphic novels and stage plays.

Tramp Press is throwing our manuscripts addressed to “Dear Sirs.” Writers, make sure you do your research.

The New York Times copped a lot of flack from romance readers and writers over their autumn romance round-up. It was written by Robert Gottlieb–best known as a literary editor. Melville House has a good overview of the situation. Over on Book Riot, Amanda Diehl takes a closer look at the round-up, taking care to eviscerate some of the more condescending remarks. The Romance Writers of America expressed their disapproval. But the NYT doubled down. And back at Book Riot, Trisha Brown discusses why the NYT’s attitude indicates a bigger problem.

However, that wasn’t the only issue Romancelandia had to deal with this month. The Ripped Bodice released its report on the state of racial diversity in romance publishing in 2016. You can read the full report or get a breakdown from Erin McCoy on Book Riot.

Natalie Zutter checks in from New York Comic Con, reporting on a discussion between N.K. Jemisin and Ann Leckie on what makes a classic work of SFF.

Heartwood is a comic anthology looking for pitches from non-binary creators. The deadline closes 13 November.

A reminder that submissions for Rosarium Publishing’s anthology Trouble the Waters: Tales from the Deep Blue close on 1 November. Stories up to 7K.

The 2017 XO Romance Prize is open to unpublished contemporary romance manuscripts until 31 October to residents of Australia and New Zealand. The prize is $5000 and publication.

The Book Smugglers are open for submissions on the theme of Awakenings until 31 December. Stories 1.5K-17.5K.

For more markets, make sure to check out SFWA’s Market Report.

Still at SFWA, president Cat Rambo has written a series on how SFWA came to open membership to indie writers.

Christina at Books and Tea is looking to do a series of interviews with Canadian authors, publishers, editors and industry professionals. If that’s you, get in touch. Details at the bottom of her post.

Jess Barber and Sara Saab discuss how they co-wrote a novelette for Clarkesworld.

BadRedhead Media looks at strategies for dealing with Imposter Syndrome.

Strange Horizons is looking for first readers for their slush pile.

Lois McMaster Bujold has announced she has a new Penric and Desdemona novella coming out. Titled The Prisoner of Limnos, she also offers a peek at the cover.

Tor Teen have acquired a new YA trilogy from Charlie Jane Anders.

Mitchell Hogan has signed a 2-book deal with 47North for a new epic fantasy series.

Juliet Marillier is working on a new historical fantasy series about warrior bards which is due to be released in the US in 2019. I have no idea how I’m going to wait that long.

Hodderscape shows off the cover for Leife Shallcross’s forthcoming novel The Beast’s Heart. So pretty!

IFWG Publishing have also released the cover for their anthology Cthulhu Deep Down Under. Horror’s not usually my jam, but I kind of love that artwork!

Ellen Datlow has released her Honourable Mentions for 2016’s Best Horror of the Year.

If the thought of getting through your Mt TBR overwhelming, Carina Pereira offers some tips.

Aimee Miles offers some further tips on lowering your anxiety about reading.