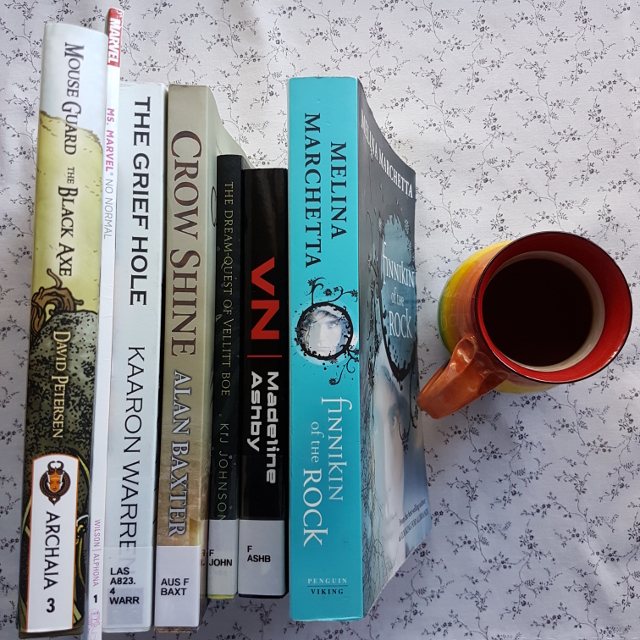 April was already a great month for my reading, but it was nice to have Dewey’s readathon to give it an extra boost. Mt TBR has increased a little with the release of the shortlists for the Hugos and the Ditmars. However, the award shortlists also mean I’m not having any trouble meeting my new year’s resolution to get to the library more often.

69. A Private Miscellany by K.J Charles. A epistolary short story following on from Charles’ historical romance series Society of Gentlemen. I enjoyed the way we checked in with all the characters and the way their letters conveyed their distinct voices. Readers will need to have read the series to appreciate this story.

71. Magic for Nothing by Seanan McGuire. Sixth in the InCryptid series. Being the youngest of the Price siblings isn’t exactly a barrel of laughs, especially when you’re struggling to hide your emerging pyrokinesis. However, life gets a whole lot harder for Antimony Price when her sister outs the family to an international organisation looking to hunt them down. Antimony must go undercover to discover what the Covenant of St George plans. I loved the new characters and McGuire’s trademark sense of humour.

72. Black Panther, Vol. 1 by Ta-Nehisi Coats, illustrated by Brian Stelfreeze. Read for the Hugo Awards. Gorgeous use of colour and it touched on some interesting issues, but it nevertheless left me feeling a little lost.

73. Mouse Guard, Vol. 3: The Black Axe by David Petersen. A graphic novel about anthropomorphic mice. The story travels back in time to show how Celanawe came into possession of the notorious Black Axe. Suitably epic and had a legendary quality not present in the other volumes.

74. Beyond Solitude by Kit Rocha. Post-apocalyptic erotica. A short novella set between the fourth and fifth books of the Beyond series. Sweet, but didn’t bring anything particularly new to the series.

75. Certain Dark Things by Silvia Moreno-Garcia. Read for the Sisterhood of the Travelling Paperback podcast. The scions of two vampire clans engage in a deadly game of cat-and-mouse in Mexico City. A wonderfully fresh take on vampires with some fantastic world-building.

77. Monstress, Vol. 1 written by Marjorie Liu, illustrated by Sana Takeda. Read for the Hugo Awards. A seemingly-human girl infiltrates a stronghold of priestesses in order to discover the truth of her mother’s death. A dark and engaging tale with absolutely exquisite artwork.

78. Finnikin of the Rock by Melina Marchetta. Review forthcoming.

79. Beyond Addiction by Kit Rocha.Post-apocalyptic erotica. Fifth book in the Beyond series. I enjoyed seeing the overall plot of the series move forward and the redemption of a character who hasn’t been on the right side of things in previous books. There were also a couple of nice moments reminiscent of Mad Max: Fury Road.

80. The Dream-Quest of Vellitt Boe by Kij Johnson. Awesome to see an older woman featured as the protagonist of a very traditional quest narrative. The world struck the right balance between the familiar and the deliciously strange. Very enjoyable.

81. Nerve Endings edited by Tobi Hill-Meyer. I don’t have much to add to Anne Rowlands’ guest review. This book is jam-packed with stories and a lot more of them were speculative than I’d been expecting. Singularity by Katherine Cross was a particular stand out.

82. Ms Marvel, Vol. 1 by G. Willow Wilson, illustrated by Adrian Alphona. A teenage Muslim girl develops superpowers and sets about using them to save her friends and acquaintances when they’re in danger. However, her inexplicable behaviour gets her in trouble with her strict parents.Utterly charming and very relateable. I’m a little sorry it has taken me so long to get to this.

Emanata (The Comics Will Break Your Heart Remix) by teaberryblue. Another recommendation from Kay. This is a charming story in which the Avengers have strict privacy clauses and don’t know each other’s true identity. So when Steve Rogers is hired by Tony Stark as a comic artist for the Iron Man line, he has some reservations about the growing attraction he feels to Tony–especially when he feels the same attraction to Iron Man. The awkwardness is just adorable and there are some very sweet moments.