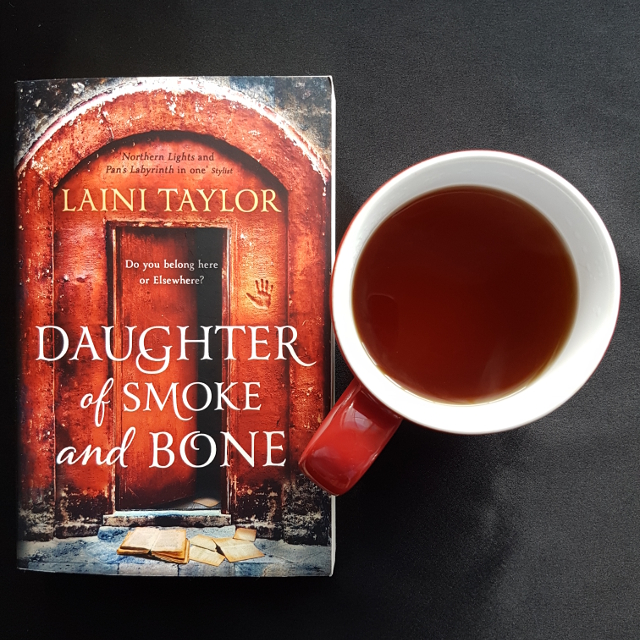 In general, Karou has managed to keep her two lives in balance. On the one hand, she’s a seventeen-year-old art student in Prague; on the other, errand-girl to a monstrous creature who is the closest thing she has to family. Raised half in our world, half in ‘Elsewhere’, she has never understood Brimstone’s dark work – buying teeth from hunters and murderers – nor how she came into his keeping. She is a secret even to herself, plagued by the sensation that she isn’t whole.

Now the doors to Elsewhere are closing, and Karou must choose between the safety of her human life and the dangers of a war-ravaged world that may hold the answers she has always sought.

When I first read Holly Black’s Modern Fairy Tales series, I adored it. Daughter of Smoke and Bone pushes a lot of the same buttons and reminded me particularly of Valiant. Both are set in a modern world that coexists with a realm of magic. Both involve a young woman who runs errands for a monster. And both are about stepping into one’s power.

The story starts out in Prague, as Karou attends an art class. We gradually learn that Karou is not the ordinary girl she appears to be (even accounting for her blue hair). The drawn-out introduction of Karou’s double life served to emphasise the mystery she presents to her friends and classmates, but was somewhat irritating because it largely relied on keeping the reader in the dark.

This irritation was somewhat mitigated by the author’s ability to create atmosphere. Her depiction of Prague is evocative, with some lovely turns of phrase. This wonderful scene-setting continues throughout the novel; as Karou hops around the world (and between them), each place feels unique while also being edged with (or entirely of) magic. The world may be ours, but there is the sense of a place where the mythic is possible. A place where angels and monsters exist.

While the characters of Karou and Brimstone put me in mind of Val and Ravus from Valiant, the nature of their relationship is quite different. Ravus and Brimstone are both monstrous in appearance and taciturn in temperament, but Brimstone is not a love interest and instead plays a fatherly role to Karou. His affection for her leaks out, despite his gruffness, even as his overbearing manner provides Karou something to rebel against. Karou’s early pettiness comes into sharp relief against Brimstone’s sombreness and this only increases as the reader learns more of Brimstone’s story.

This is not to say there’s no love interest. The focus is initially on the relationship between Brimstone and Karou, but moves away to concentrate on the romance. There is conflict between these relationships from the beginning and though it dies down while the romantic relationship is explored, it’s always an underlying current. This conflict rushes back to the surface as the book winds to a close.

The romantic relationship is not going to be for everyone’s taste. It may be argued that it’s a bit insta-love, though I found that wonderful evocation of atmosphere made it work. I felt it depicted longing and attraction well without descending into the mawkishness which plagues some YA. While physical attraction is conveyed, it’s played down in favour of emotional connection.

I’m rather sorry I left Daughter of Smoke and Bone on Mt TBR for so long and will be definitely tracking down the next book in the series.

6 thoughts on “Daughter of Smoke and Bone by Laini Taylor”