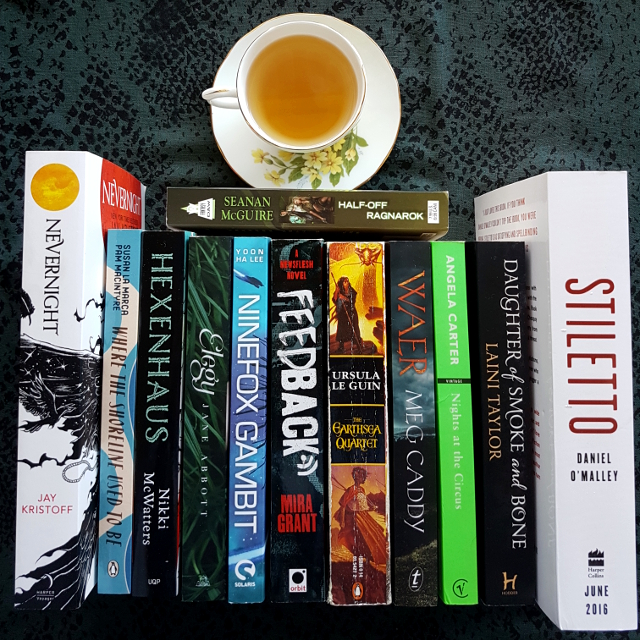 Oh boy. October was a pretty good month for reading. It also involved a flood of acquisitions: some Aurealis entries, some gifts, some acquisitions from Conflux, some loans and some just because I had to have them. So usual story (well, except for the gifts), just slightly higher numbers.

My #ReadMyOwnDamnBooks stats continue to slip. My goal for the challenge was to make sure 60% of the books I read this year come from Mt TBR. I finished September at 48%. October takes me down to 45%. With all the Aurealis reading I have to get through, it’s unlikely to improve before the year ends.

The positive news is that I managed to hit my Goodreads Challenge target of 90 books and I look set to hit my personal goal of 100 books before the year ends.

81. Betrothed by Wanda Wiltmore. A fantasy YA about a girl who discovers she’s bonded to a faery prince. While I love a good paranormal YA romance, this was a bit overwrought for my taste.

82. The Long Way to a Small, Angry Planet by Becky Chambers. This book has been getting a lot of love and I can see why. A ragtag crew are sent on a long journey through space to create a hyperspace tunnel. The diversity and worldbuilding are amazing, with cultural and personal differences being a focus of the book. Each chapter is more or less constructed as its own episode. This was one of my favourite books this year and I’m looking forward to reviewing the sequel.

83. Half-off Ragnarok by Seanan McGuire. The third in the InCryptid series. This book focuses on Alex Price, Verity’s brother. Set in a zoo in Ohio, it doesn’t have the urban snappiness of the previous two books, but nevertheless remains fun. I wasn’t entirely sold on Shelby’s Australian-ness, but appreciated that she didn’t fall into stereotypes and was more than simply her nationality. Besides, I’ll forgive a lot in a book that makes me laugh out loud as many times as this one did.

84. Daughter of Smoke and Bone by Laini Taylor *. Reviewed here.

85. Dune Time by Jack Nicholls. Read for the Aurealis Awards. A novella about a pair of Muslim brothers living on the edge of the desert, photographing the moving dunes of sand.

86. A Closed and Common Orbit by Becky Chambers. Review forthcoming.

87. Waer by Meg Caddy. Read for the Aurealis Awards. A family of waerwolves take in a young woman who mysteriously washes up on the banks of the river. It has the feeling of epic fantasy while remaining a standalone novel.

88. The Earthsea Quartet by Ursula Le Guin. This series of stories follows the wizard Sparrowhawk through different stages of his life. I last read this classic a decade or two ago but it looms large and luminous in my teenage memory. Now that I’m in a place to see what Le Guin was trying to do with it, I appreciate it even more.

89. Saga, Vol. 5 by Brian K. Vaughan and Fiona Staples. Space opera in graphic novel format. Marko pursues his kidnapped family who are likewise looking for an opportunity to escape. This volume retains the fast pace of its predecessors, and likewise continues to subvert tropes and expectations. The series is also a must for people who love unlikely team-ups, though be warned: there’s quite a body count.

90. Saga, Vol. 6 by Brian K. Vaughan and Fiona Staples. There’s a slight time jump between volumes here, keeping the story moving forward nicely. I thought this volume did some interesting things with both Klara and the Will. It also continues its tradition of diverse characters, with the introduction of an intersex character. The vulgarity remains a little much for me, but is a hallmark of the series and unlikely to change.


Nights at the Circus by Angela Carter
Everfair by Nisi Shawl
The Dragon with the Chocolate Heart by Stephanie Burgis
Unbidden by Shayla Morgansen
Robyn and the Hoodettes by Ebony McKenna
Heart Hunter by K.S. Nikakis
Feedback by Mira Grant
Ninefox Gambit by Yoon-Ha Lee
Perdido Street Station by China Mieville
Trade Me by Courtney Milan

Rift Riders, Prologue – Ch. 5 by Becca Lusher. The next in Becca’s Wingborn series, Regency-inspired YA featuring giant eagles and their riders. Monsters and pirates are banding together, leaving Mhysra and her fellow Rift Riders in a precarious position.