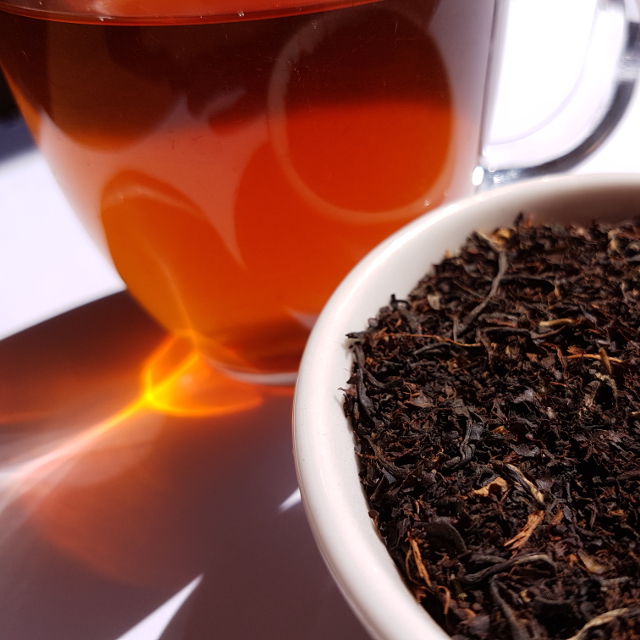 Loose-leaf Links is a feature where I gather together the interesting bits and pieces on sci-fi and fantasy I’ve come across and share them with you over tea. Today’s tea is Tassie Devil Tea from The Art of Tea. This mix of Australian, Indian and Sri Lankan teas is surprisingly light, making it a good afternoon tea. It is also a tea with a good cause: 50c from the sale of each packet goes directly to the Bonorong Wildlife Hospital.

Conflux 12 took place at the beginning of the month and I reported on it in two parts. The Canberra Speculative Fiction Guild have a round-up of convention reports from other members. However, they missed a few, including one from Guest of Honour Alan Baxter. Master of Ceremonies Sean Williams was in Canberra for a month leading up to the convention and has shared some of his experiences of that time. Rivqa Rafael has also storyfied her comprehensive tweets of the convention.

However, even Conflux can be a problematic favourite. No Award offers some criticism on aspects of this year’s convention.

Regular readers will know I’m a huge fan of Juliet Marillier and loved her latest book, Den of Wolves. If you’re also a fan and live in the US, you may be interested to know she’ll be appearing at a few conventions over the next few weeks.

The Helsinki Worldcon are set to trial a new Hugo Award for Best Series. While I’m somewhat excited about this, Elizabeth from Books and Pieces offers some astute criticism of the implementation in her guest appearance on the Fangirl Happy Hour podcast.

forestofglory discusses current moves to institute a new Not-A-Hugo award for the category of YA, and requests help in naming this new award.

A reminder that entries for the 2016 Aurealis Awards close on 7 December. If you have anything eligible being published in 2016, please enter!

Earlier this month, David Weingart was fired from the Worldcon staff for failing to abide by an agreement to stay away from another staff member. Jim C. Hines has a summary and analysis of the situation.

In equally unpleasant news, a number of women in the SFF community spoke out against Sunil Patel for gaslighting and manipulative behaviour. File 770 has some of the relevant links. A number of publishers have distanced themselves from Patel, including the Book Smugglers–who will no longer be selling Patel’s novella The Merger.

The Stella Count is a survey of reviews featured in Australian publications. It particularly examines the gender breakdown of authors reviewed. In 2015, a new survey was added. Female and gender-diverse authors were contacted and invited to answer four short questions on gender identity, sexuality, race and disability. The results were released earlier this month.

Romance author Sarah MacLean discusses some of the responses she gets when people learn she writes romance and posits that bashing romance is another form of slut-shaming.

Thank you to Rivqa Rafael for directing me to this article: How to Review a Trans Book as a Cis Person.

Tor.com is open to unsolicited fantasy novella submissions until 12 January. They’re particularly interested in fantasy not modelled on European cultures.

coeur de lion is also open for submissions for their Dimension6 e-zine until the end of the month. They’re looking for speculative fiction of 4.5-40K words.

In the wake of the huge success of their anthology Letters to Tiptree, Twelfth Planet Press have announced a new anthology in the same vein. Letters to (Octavia) Butler is currently open for submissions. Letter should be 1-1.5K.

Peter Ball takes a realistic look at the amount of time he has for writing each week. As someone who is generally more aspirational than realistic when it comes to scheduling, I could relate.

Local author Sam Hawke has signed a two-book deal with Tor Books. City of Lies is due for release in 2018. Congratulations, Sam! Check out her blog for the story of her publication.

Amanda Pillar has released the cover and blurb for the second novel in her series Graced. Bitten is due out in January and I can’t wait!

Nicole Brinkley continues her excellent work at Book Riot with this list of 10 spec-fic stories for when you only have 10 minutes.

Over at Speculative Chic, Casey Price shares why you should check out Mira Grant’s Newsflesh series. I loved the books and Casey does a great job of explaining why the series is so awesome.