Conflux 12 took place from Friday 30 September until Monday 3 October. As is always the case, there was a lot of good programming to see, so I had to split my report into two parts. You can read the first part here.

Craig Cormack moderated an excellent panel on disability in SFF featuring K.J. Taylor, Gillian Polack and Kristy Evangelista. Kristy was a contributor to Defying Doomsday, which provided a focus point for some discussion. While the anthology was acknowledged as needed and doing excellent work, it was also pointed out that the apocalypses featured had been carefully engineered in order to make the specific disability being written about be advantageous. Reality is rarely so kind. There was also some discussion of the magical cure trope. Kristy was strongly of the opinion that the use of this trope invalidated any positive representation of disability that may have preceded it. Gillian also pointed out a corollary suggesting that those people without a cure for their disability were being punished. There was a discussion of how all too often a disabled character’s role is to inspire or to teach, and are rarely shown as having value in their own right. It also doesn’t allow space for the idea that disability is a part of self and doesn’t need to be fixed. K.J. rejected the idea of being cured of autism; rather, it is a part of who she is. Finally, the panel touched on family dynamics. A supportive network is often assumed, but isn’t always the case. 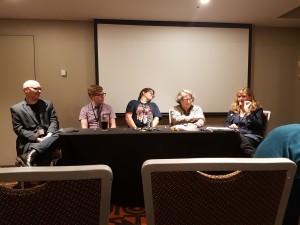 This panel segued nicely into one on the physical cost of writing, moderated by Dawn Meredith. Panel members were Belinda Crawford, James Hayman, Gillian Polack and Sean Williams. Every panel member had experienced some form of RSI. Some panelists also had to deal with unrelated chronic illnesses or injuries. There was a general consensus that it was useful to write in short bursts broken up by regular movement. While there is a popular image of creatives working day and night on their magnum opus, in practice it is unhealthy and takes its toll. The importance of sleep was also emphasised, with writers discussing how they handle inspiration in the middle of the night. Sean was of the opinion that if it was a really good idea, it would persist when he woke up in the morning and could write it down. Gillian, who deals with complex academic analysis, found it was better for her to get up and write it down rather than stay awake worrying all night about whether she would remember it. As with the previous panel, family was touched upon. Communicating your limits to your loved ones is important, but can be challenging to do without making it a pity party or seeming like a special snowflake.

I also managed to live tweet the panel on Asian SFF that took place on Monday. The experience gave me new appreciation for Rivqa’s tireless efforts to live tweet as much of the convention as possible. 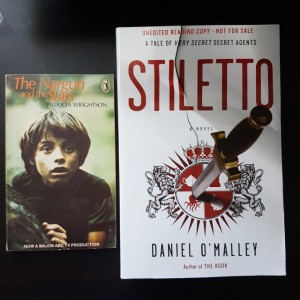 Day 2 con loot: The Nargun and the Stars by Patricia Wrightson and Stiletto by Daniel O’Malley

Guest of Honour Alan Baxter was interviewed on Sunday morning by horror writer Rob Hood. Born in Britain, Alan came to Australia in his mid-twenties to visit a friend, then met his wife and stayed. Prior to that, his focus had been very much on his martial arts training. He remains a Kung Fu instructor and finds the discipline has been very beneficial for his writing. He has always written in snatches of time wherever possible. At first, this was in his lunch breaks when he worked an office job. These days, it’s in the gaps between running his personal training business and looking after his son. He is fierce about protecting his writing time. “We’re all busy,” he noted. “You make the time.” Although he writes horror and dark fantasy, he doesn’t perceive his work as horror or horrible. Instead, he thinks of it as honest. The reaction of a person to a monster is humanity magnified, and he feels writers need a good grasp of humanity to portray it well and allow the suspension of disbelief. It was also important to Alan to represent Australia in his stories, particularly as the country lacks the body of work that the US and the UK have behind them. However, he doesn’t perceive himself as nationalistic and makes an effort to write across a variety of international settings. 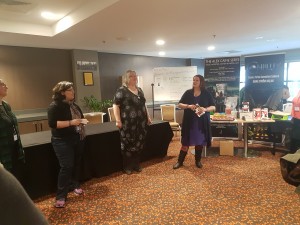 There was plenty of book loot throughout the weekend. I caught up with Thoraiya Dyer perusing the second-hand book stall in the dealers room. She was sad she had no one to whom she could pitch Patricia Wrightson’s The Nargun and the Stars (having already read it and loved it herself), so I helpfully admitted I hadn’t read it. I also picked up a couple of new books from the Harry Hartog stall. And then there were the book launches. FableCroft Publishing launched their last book before their indefinite hiatus: Tansy Rayner Roberts’ collection of Mocklore short stories, Bounty. Since I hadn’t read any of the series (despite enjoying Tansy’s work), I picked up the lot and got them signed.

Unfortunately, all good things must come to an end. At the closing ceremony, Sean Williams demonstrated the last of his Sci Chi. There’s an excellent video of Sean and Alan Baxter, if you’re interested in learning the moves (or just being mightily entertained). The results for the Conflux/CSFG short story competition were announced, and I was very pleased to see Pia van Ravenstein win first place. Shauna O’Meara was thanked for the gorgeous artwork she contributed (and the gorgeous banner at the top of the post is hers). The last announcement was the theme for Conflux 13: Grimm Tales.

I was thoroughly worn out by the end, but the first thing I did when I got home (after making a cup of tea) was to book tickets for next year. I had such a wonderful time catching up with old friends and making new ones that I wouldn’t want to miss out on the next time. 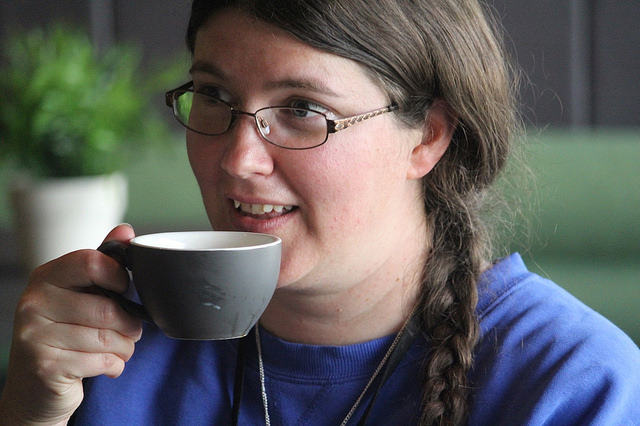 The editor in her natural habitat. Photo courtesy of Cat Sparks.

Into the Bayou
Den of Wolves by Juliet Marillier