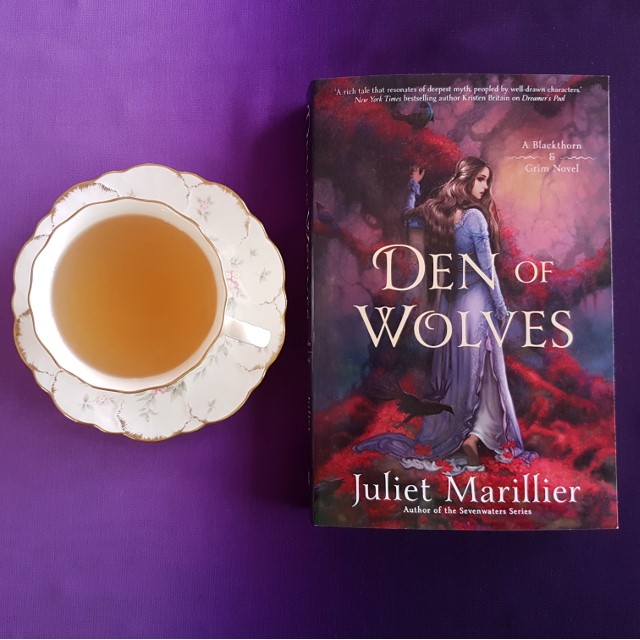 Healer Blackthorn knows all too well the rules of her bond to the fey: seek no vengeance, help any who ask, do only good. But after the recent ordeal she and her companion, Grim, have suffered, she knows she cannot let go of her quest to bring justice to the man who ruined her life.

Despite her personal struggles, Blackthorn agrees to help the princess of Dalriada in taking care of a troubled young girl who has recently been brought to court, while Grim is sent to the girl’s home at Wolf Glen to aid her wealthy father with a strange task–repairing a broken-down house deep in the woods. It doesn’t take Grim long to realize that everything in Wolf Glen is not as it seems–the place is full of perilous secrets and deadly lies…

Back at Winterfalls, the evil touch of Blackthorn’s sworn enemy reopens old wounds and fuels her long-simmering passion for justice. With danger on two fronts, Blackthorn and Grim are faced with a heartbreaking choice: to stand once again by each other’s side or to fight their battles alone…

Den of Wolves was one of my most anticipated books of 2016. It didn’t let me down, though it also didn’t go quite where I expected.

The book is slightly less discrete than its predecessors. While there is a self-contained mystery, the resolution of Blackthorn’s story (and, to a lesser extent, Grim’s) forms an important plot thread. Key parts of Den of Wolves are set in the same locations as Dreamer’s Pool and involve some of the same characters. I would therefore not recommend that new readers start here.

The stylistic choices of the previous books carry over. Chapters alternate between key characters; Blackthorn and Grim’s chapters are told in first person, while chapters focusing on other characters use a close third-person perspective. Each voice is distinct and deftly handled, with some lovely turns of phrase.

Violence against women has always been a key theme of the series. Den of Wolves augments this by focusing on male privilege. Men occupy positions of power and frequently make decisions concerning the female characters without any kind of consultation. In some cases women are carted around like furniture and forced to leave homes they’ve known all their lives. Marillier makes very evident the frustration, powerlessness and fear this engenders in the female characters. I particularly appreciated that it’s not just the “evil” male characters that act this way. On the contrary, some of them have good intentions but seem to have no grasp of the effect their authoritarian approach has on the women around them. They assume they know best and expect everyone around them to obey.

I had a few thoughts on the ending that is impossible to discuss without spoilers. To put it as vaguely as possible: although the ending was foreshadowed and I appreciate what it was doing, I was a tiny bit disappointed. It negated a portrayal that, to my mind, was even rarer and more valuable.

Nevertheless, I very much enjoyed the book and the series remains a favourite.

One thought on “Den of Wolves by Juliet Marillier”