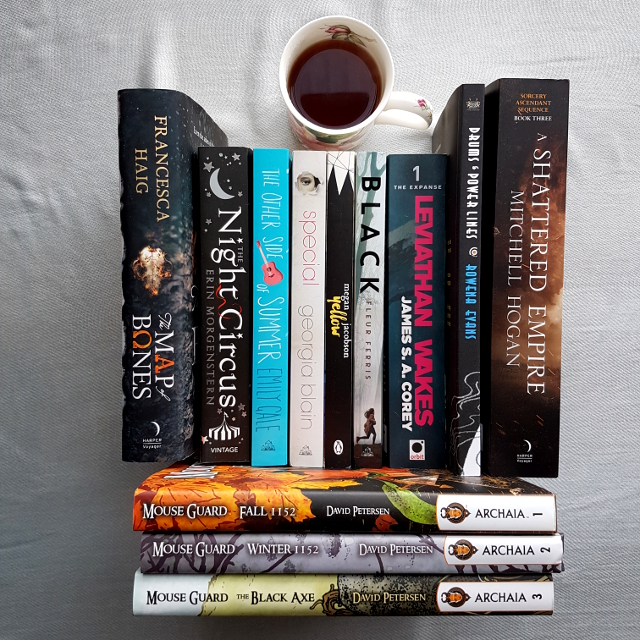 I did a decent amount of reading this month, but just couldn’t keep up with the onslaught of books that came in this month. Most of these acquisitions came as Aurealis entries, but there were a few review books and I also couldn’t resist a few other bits and pieces. Mt TBR is definitely at a record new height.

Much to my surprise, my #ReadMyOwnDamnBooks stats have only slipped slightly. My goal for the challenge was to make sure 60% of the books I read this year come from Mt TBR. I finished July at 51% and the end of August has me at 50%.

65. Raelia by Lynette Noni. Read for the Aurealis Awards. The second in the Medoran Chronicles.  Alex Jennings is a magically gifted girl who returns from our world to the fantastical world of Medora to attend a special academy. It’s not all smooth sailing, with the immortal Aven out to exploit her gifts for his own ends.

66. Every Heart A Doorway by Seanan Mcguire. Nancy stepped through a doorway to an Underworld and was changed forever. Now she’s back in her own world and doesn’t want to be. She ends up at Eleanor West’s Home for Wayward Children, a boarding school for children who have returned from other worlds. But the school doesn’t prove the safe haven it promises to be, as someone is murdering her fellow students. The murderer was a bit predictable, though the ending came as a surprise.

67. Discount Armageddon by Seanan Mcguire *. The first book of Mcguire’s InCryptid series. Verity Price is trying to juggle a career as a pro ballroom dancer with her family duty as a cryptozoologist in New York. Things get more complicated with the arrival of a young man from the Covenant of St. George–an organisation that wants Verity and her family dead. Fun and fluffy urban fantasy with lots of action and a dash of romance.

70. At the Edge edited by Lee Murray and Dan Rabarts. Read for the Aurealis Awards. An anthology of Australian and New Zealand horror.

71.  Illuminae by Amie Kaufman and Jay Kristoff *. A sci-fi YA. It follows two teenagers who survive when their planet is attacked by a nefarious corporation. The story is told in an unconventional way through documents and transcripts, and also involves an insane AI and space zombies. A book that lives up to its hype.

73. A Town Called Dust by Justin Woolley. A dystopian YA about the zombie apocalypse in Australia. It twists Australian elements into something new, but ultimately didn’t do a good job of holding my interest.

74. Mouse Guard: Fall 1152 by David Petersen *. A comic about anthropomorphic mice. In a world where humans don’t exist, mice have intelligence, culture and medieval technology. They live in hidden cities that are isolated from each other. It is up to the Mouse Guard to ensure the ways between these cities are safe. Don’t be fooled by the cute mice and the bright colours–the story is pretty dark.

Special by Georgia Blain
The Other Side of Summer by Emily Gale
Yellow by Megan Jacobson
Evangeline and the Alchemist by Madeline D’Este
Drums and Power Lines by Rowena Evans
Blazing Dawn by Becca Lusher
A Closed and Common Orbit by Becky Chambers
Leviathan Wakes by James S.A. Corey
The Night Circus by Eric Morganstern
Stealing Snow by Danielle Paige
A Shattered Empire by Mitchell Hogan
Dune Time by Jack Nicholls
Charming by Kirstie Olley
The Troll’s Toll by Kirstie Olley
Heart of Brass by Felicity Banks
The Map of Bones by Francesca Haig

Wingborn Ch 21-end by Becca Lusher. A Regency-style fantasy with giant eagles. Trouble threatens Aquila both from within and without. As usual, Mhysra’s in the thick of it all.

Superior by Jessica Lack. This superhero gay YA romance is utterly adorable. A superhero’s intern falls in love with a supervillain’s apprentice. Lots of crunchy goodness about moral codes and the way things are never black and white.