You are here: Home > Bout of Books 17 report 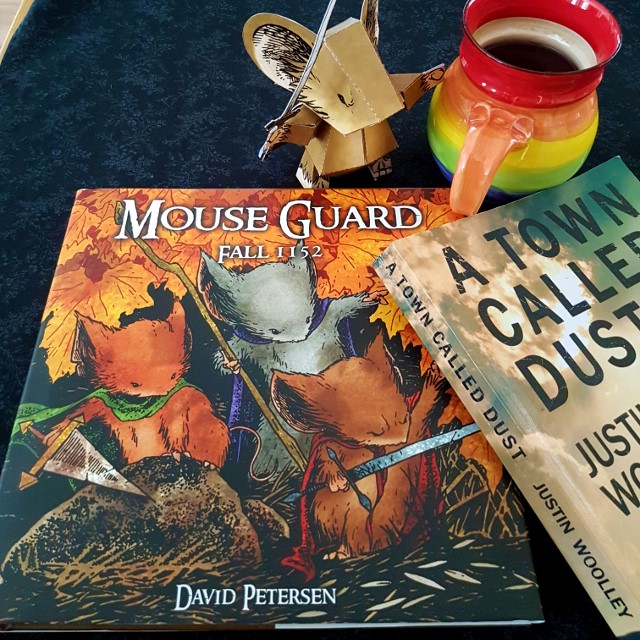 Round 17 of Bout of Books wrapped up on Sunday, so it’s time for me to check in with my progress!

In my sign-up post, I mentioned my goal was to get through a minimum of three books. For a while there, I wasn’t sure I was going to make it. I started out with Peter S. Beagle’s Summerlong. While short, the book has the golden-honey pace of the season for which it’s named and never really grabbed me. Wednesday was wrapping up by the time I finished.

I moved on to A Town Called Dust by Jason Woolley. It was another book that didn’t really grab me. If I hadn’t received a reminder from the library that it was due back soon, I probably would have dawdled with it until the end of the week.

But I did manage a third book. Mouse Guard: Fall 1152 arrived at my house just this week (with two of its friends). It’s a comic by David Petersen about anthropomorphic mice. In a world where humans don’t exist, mice have intelligence, culture and medieval technology. They live in hidden cities that are isolated from each other. It is up to the Mouse Guard to ensure the ways between these cities are safe. Don’t be fooled by the cute mice and the bright colours–the story is pretty dark. There’s a role-playing game based on the comics. My gaming group is starting a campaign this weekend, so in preparation I blasted through the entire volume in a little over an hour on Saturday afternoon.

With my challenge goal met, I slacked off on Sunday–partly to meet some social commitments.

What about you? Did you join in Bout of Books last week? If so, how did you do? If not, what did you read over the week?

For those interested in the next Bout of Books, it will take place on 2-8 January 2017. For further details, keep an eye out here or head over to the Bout of Books blog.

2 Responses to Bout of Books 17 report