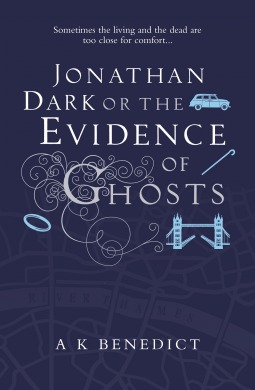 Maria King knows a secret London. Born blind, she knows the city by sound and touch and smell. But surgery has restored her sight – only for her to find she doesn’t want it. Jonathan Dark sees the shadowy side of the city. A DI with the Metropolitan Police, he is haunted by his failure to save a woman from the hands of a stalker. Now it seems the killer has set his sights on Maria, and is leaving her messages in the most gruesome of ways.

Jonathan Dark or The Evidence of Ghosts is a supernatural crime novel that kept me guessing. It was a bit of an uneven book, managing some elements with sensitivity while slipping back towards stereotypes at other times.

Any supernatural crime novels set in London are bound to invite comparisons with Ben Aaronovitch’s Peter Grant/Rivers of London series. However, I found Jonathan Dark was quite a different beast. There is no humour to leaven out the story, rendering it a darker, moodier story. The eponymous Jonathan Dark clearly has more experience at his job than Peter Grant. He also has quite a lot more baggage, particularly in the form of his estranged wife with whom he’s still in love. It gives the character a more hard-boiled feeling, almost edging into noir in places.

Benedict’s London is also quite different to that of Aaronovitch. It is a much more intimate portrayal that focuses on the environment immediately around the characters. Being effectively blind, Maria primarily relates to her surroundings through her other senses, thus giving the reader a chance to do likewise. It brought the setting to life in a way that was a bit different to usual and which encouraged a feeling of intimacy. This was reinforced by Benedict’s rather lyrical style and use of present tense.

As best as I could tell, Maria’s disability was handled sensitively. Other characters didn’t always respect her choice to remain blind, but Maria remained fiercely independent throughout the story. Sometimes both her disability and her independence hindered her, and sometimes they aided her. Throughout, they remained a core part of her character and never became mere set dressing.

This wonderful complexity made it all the more disappointing when other elements of the plot slid towards stereotype. It is difficult to discuss these elements without spoiling anything, as they largely involved portrayals of the murderer and one or two of the red herrings.

Also disappointing was the lack of integration between the crime elements and the supernatural elements. Although they overlap in places, I never felt like they meshed properly, leaving Benedict’s supernatural London feeling distant. Other reviewers have commented they found this to be more of a fantasy novel than a crime novel, but for me it was quite the opposite.

By and large, I think the flaws are those of a relatively new writer. The way has been left open for a sequel and so I’d be interested to see if things improve in subsequent books.

2 thoughts on “Jonathan Dark or The Evidence of Ghosts by A.K. Benedict”