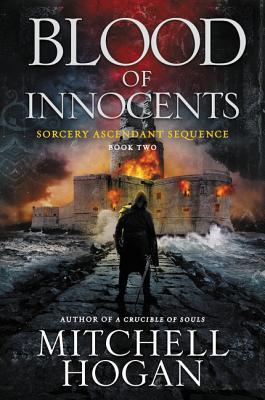 As orphaned, monk-raised Caldan and his companions flee the city, leaving behind their hopes for a new beginning, horrors from the time of the Shattering begin to close in.

With Miranda’s mind broken by forbidden sorcery, Caldan does the unthinkable to save her: he breaks the most sacrosanct laws of the Protectors. But when the emperor’s warlocks arrive to capture him, Caldan realizes that his burgeoning powers may be more of a curse than a blessing, and the enemies assailing the empire may be rivaled by more sinister forces within.

And soon, the blood of innocents may be on Caldan’s own hands.

Blood of Innocents is a disappointing follow-up to A Crucible of Souls. The characterisation is shallow and the pacing slow.

The book follows the grimdark trend of epic fantasy in that almost all of the characters are unlikeable and act selfishly.Bells is biding her time to make her escape, Amerdan is on the lookout for his next victim and Elpidia is obsessed with curing her mysterious disease. Even Caladan is looking to assuage his guilt over Miranda’s brain damage and to avoid the punishment he knows is going to come from disobeying the laws of the Protectors. This dim view of humanity creates a world in which Caladan is hailed as a hero when he finally does something that’s purely altruistic.

Many of my criticisms of the previous book remain and are even reinforced. Caladan continues to be a Gary Stu character and although there are hints that there is an explanation for this, they haven’t been developed beyond what was offered in the first book. Perhaps Caladan’s angst over killing for the first time was meant to balance it out, but it comes across much like Bella’s clumsiness in Twilight in that it has no real or lasting impact on his actions. I also found his use of Miranda to justify his actions was distasteful.

Speaking of which, the representation of female characters continues to be poor–perhaps even more so than the first book. The number of female characters isn’t great and once again a disproportionate number meet ugly fates. Miranda spends the entire novel in a fugue state, serving as an obstacle as the group flees Anasoma and so that Caladan has someone to pine over. Felice is the most interesting of the female characters, having a modicum of authority. However, it ends up being taken away from her and of course all the ultimate authorities are men. Apparently, confusing the reader withtwo emperors is preferable to including an empress. It was also disappointing thatthere’s never a sense of Felicebeyond her role–no real indication of what she’s like as a person, what her likes and dislikes are.

The book doesn’t even work well as a swords and sorcery story, being bogged down with descriptions and explanations of every instance of magic. Information and opinions are often repeated, slowing the pace of the story.

Obviously, Blood of Innocents was not my cup of tea. Readerslooking for a good epic fantasy are better off trying Jennifer Fallon’s The Lyre Thief.

4 thoughts on “Blood of Innocents by Mitchell Hogan”