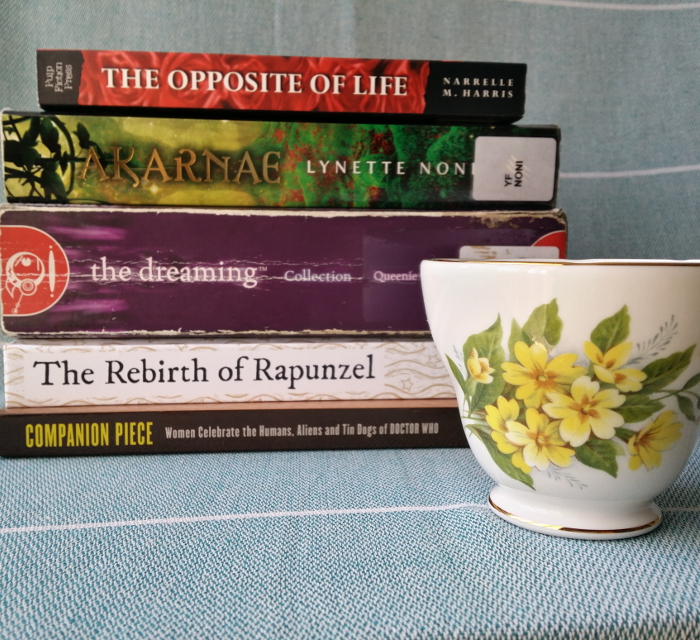 Um. So, between some excellent sales (particularly from Samhain as they wind up), some raids on the library in preparation for Contact and my trip to the Contact dealers room, I might have been a bit excitable with my acquisitions. Even keeping up my excellent reading rate hasn’t helped. But I always knew March was going to bring in a lot of books.

Unsurprisingly, my #ReadMyOwnDamnBooks stats have taken a dive. My goal for the challenge was to make sure 60% of the books I read this year come from Mt TBR. At the moment, it’s at 40%, so I have a fair bit of work to do and will be concentrating on that in the coming month.

23. Falling in Love with Hominids by Nalo Hopkinson. Reviewed here.

24. Jackdaw by KJ Charles *. Another story set in the world of A Charm of Magpies. Jonah is a windwalker and a thief who got tangled up with the wrong crowd. When he betrays Ben–his lover and a police officer–Ben comes looking for revenge. Charles does a great job of capturing the desperation of their situation and how poverty in particular almost swallows them both.

26. Think of England by KJ Charles *. A historical m/m romance set in 1904. Quite a different feel to Charles’ A Charm of Magpies series. Archie Curtis was injured in a military accident and seeks to discover whether it was actually sabotage. I liked that Archie didn’t start out with the awareness that he was gay, but that it was something he ended up discovering about himself.

27. The Dreaming by Queenie Chan. Creepy gothic manga set in Australia. Twin girls get shipped off to stay with their aunt at a remote boarding school, where strange disappearances are becoming too commonplace. I probably shouldn’t have read this one after dark.

28. Jonathan Strange or the Evidence of Ghosts by A.K Benedict. Review forthcoming.

29. Arkanae by Lynette Noni. A young girl steps through a portal into another world where she ends up attending an academy for students with special abilities. An enjoyable story but read like Harry Potter with the serial numbers filed off.

30. Foxglove Summer by Ben Aaronovitch. The fifth in the Peter Grant/Rivers of London series. Peter takes a much-needed break from London to help search for two young girls abducted in the country. Includes fae done right.

The Secret Casebook of Simon Feximal by KJ Charles
Sunbolt by Intisar Khanini
Penric’s Demon by Lois McMaster Bujold
Up and Coming curated by S.L. Huang and Kurt Hunt
Cranky Ladies of History edited by Tansy Rayner Roberts and Tehani Wessely
A Seditious Affair by KJ Charles
Marked in Flesh by Anne Bishop


Unwrapped Sky by Rjurik Davidson
Little Red Riding Crop by Tiffany Reisz
Provoked by Joanna Chambers
Raelia by Lynette Noni
The Rebirth of Rapunzel by Kate Forsyth
Companion Piece edited by L.M. Myles & Liz Barr
To Hold the Bridge by Garth Nix
The Opposite of Life by Narelle M. Harris
Bespelled by Dani Kristoff
The Summon Stone by Ian Irvine

Wingborn Ch 1-3 by Becca Lusher. Membership to the Rift Riders is open to women for the first time in over a century and Lady Mhysra Kilpapan isn’t going to let anything stop her from enrolling. Especially since she is Wingborn and thus already bonded to a giant, grumpy eagle called Cumulo. Well-paced fantasy with snappy dialogue and interesting world-building. But I may be biased, having read previous drafts.